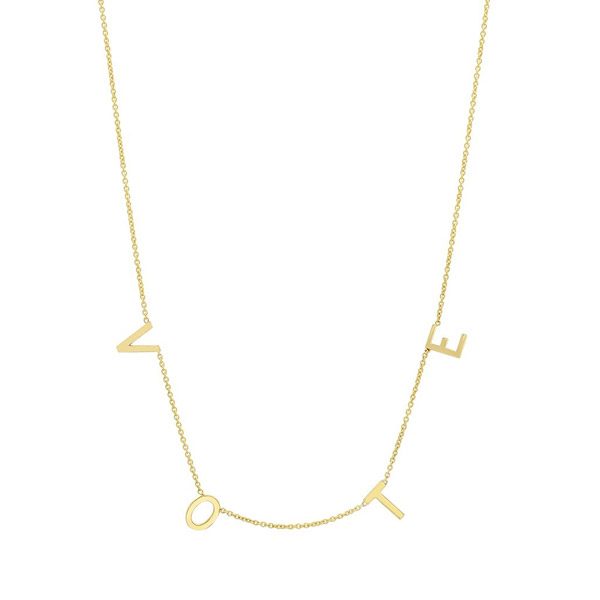 The Democratic National Convention kicked off last night, and while there were plenty of memorable moments, one of the biggest items to come out of the evening is the necklace worn by former first lady Michelle Obama.

While the former FLOTUS spoke eloquently—and straightforwardly—in her message to viewers, it was perhaps her accessory that spoke the loudest. A necklace from ByChari, a Black-owned jewelry business out of Los Angeles, displayed one simple word: vote.

Never mind that the silhouette of the necklace is perfectly on-trend: It is. Its four letters sit along the chain in a style that’s often seen in personalized name necklaces that have been popular lately, and it’s a style that plays well with others. But its message, most of all, is its biggest selling point.

To those either not attuned to or not interested in the fashion and jewelry worlds—which many consumers are very interested in—it might seem inane that a necklace would make headlines on the first night of the DNC. But it would be foolish to dismiss such an accessory, particularly one that sends such a powerful message through its diminutive stature.

“Vote your heart out,” says part of the necklace’s description on the designer’s website. And vote one must. The jewelry industry has been vocal and active in tackling some of our country’s biggest issues—actions that have spoken loudly, especially during these times—but to vote is the loudest, most substantial act one can take. It is a privilege not to be wasted or underestimated.

This piece will likely sell out. Michelle Obama has been a tastemaker since her days in the White House, but this goes far beyond that. The necklace is produced on demand, but it’s uncertain how an inevitable surplus of demand will affect its production. Have your pick of 14k yellow, white, or rose gold, in letters small or large, with diamonds or without. The prices start at $295 and top out at $1,260, the top price for a diamond version in a 20″ length. The options are suited to any style and fit many budgets, which makes it a compelling purchase for those wanting to embody this simple, beautiful message.

The style is long-lasting, and not simply for the current election. To vote is to speak, and that will exist for as long as we have the right to do so.

ByChari was established in 2012 by designer Chari Cuthbert, and now employs a team of women to help consumers wear their hearts and souls through simple, beautiful jewelry. Each piece is handmade sustainably in Los Angeles.