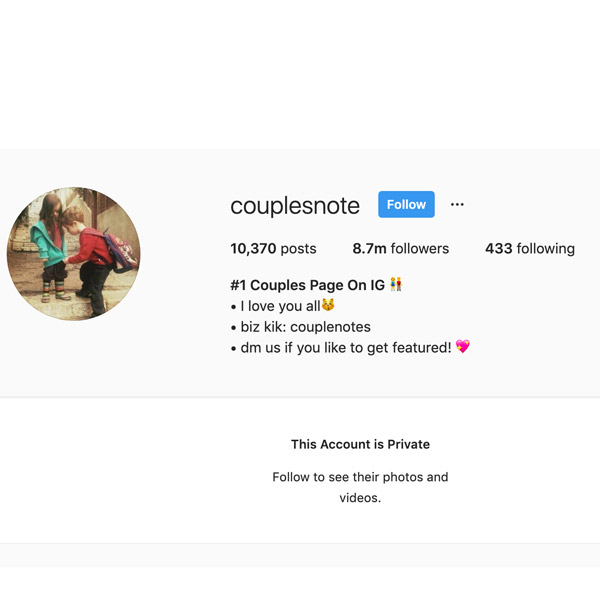 There was once a time that I found private Instagram accounts to be a little weird. Maybe weird isn’t quite the word, but I never expected anything from them. The private accounts I knew were those distant older relatives who posted random photos with no captions roughly once a quarter. So, in a word, uninteresting.

Then I had a baby, and my own account quickly went from photos of far-off places and wine-soaked group hangs—scattered with jewelry, of course—to, well, all baby. And I began to ponder if maybe I needed my account to be private, too.

So I made the switch.

And wouldn’t you know it, I’ve started a trend! No, not really. But it turns out, it’s not just personal accounts that have taken their photos private—businesses are doing it, too.

Personally, I now love having a private account. I can approve who sees my photos (there is so much spam out there), and I know that the followers I do have are legit—my number doesn’t really go down (or up for that matter), and I have an engaged, enthusiastic audience (made up of mostly family and friends, but interested parties, nonetheless).

So what’s in it for businesses wanting to cast a wider net? Exclusivity, for one.

There was an article in the Atlantic in July of last year about the number of über-popular meme accounts switching from public to private. In it, there’s a quote that nails the punchline: “People go private because they get more followers when a follower sends a post to their friends and that person has to follow the account in order to see. It’s that simple,” says Jack Wagner, a Los Angeles–based director who has run several meme accounts. “It’s just a weird technique somebody noticed one day, and now lots of people do it.”

Bottom line: If you’re public, people can see your stuff without following you, and maybe will never return to your account again. If you’re private, though, they’ve got to commit (as much of a commitment as requesting to follow is) to see what you’re putting out there. And once they’re following you, you’ll get out in front of them more often.

There are caveats to this. For one, sometimes going private really ticks people off. Having to go that extra step (as simple as it is), may be off-putting for some potential followers. It could backfire—maybe they think, “Forget it, I don’t need to see your image that badly.” And if you’re looking to start an Instagram account, it’s probably best to kick it off as public, in case you plan to take advantage of popular hashtags—these won’t show up on those feeds, if your account is private.

I think, depending on the vibe or image of your business, it could be a huge win. It could be like creating a club, where you feel like you have this locked-in audience that you’re creating content for. As a public account, you’re sending your images off into space and hoping for the best. Go private, and you’ve got that control—your audience members bought the ticket, they’re into the performance.

If you do go private, keep in mind that attention to your account is key—I’d argue that a private account requires a bit more maintenance than a public one does, especially since you need to stay on top of your follow requests. An eager audience does not like to be kept waiting, so accept or reject those requests ASAP! And remember, it’s very easy to switch back and forth between private and public—neither is a permanent switch. The only thing you need to keep in mind is that if you switch from private to public, any pending follow requests will be automatically approved.

So that’s it! Does this sound like something you’d be interested in trying? I personally don’t have enough of a following/I am not a brand to compare the percentage of followers gained as a private account. But for those who do, I’d love to know if you’ve found making the switch to be beneficial. Send me an email (or find me on Instagram, if you dare!) to discuss.