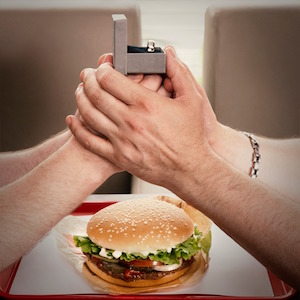 Burger King’s German arm is talking up “Whopper Diamonds”—gemstones grown from the ashes of its signature burger.

The fast-food chain is also running a contest—with Whopper Diamonds as the prize. On Facebook, it is telling its followers to post a “picture of you & your partner here in the comments and tell us what makes him your favorite person. We are fire and flame for your love stories.”

While diamonds have long been made from human ashes, this seems to be the first example of a company turning its product into ashes, getting those ashes fashioned into diamonds, and then using the resulting diamonds as part of a marketing campaign.

The diamonds are meant to give Burger King fans “the exclusive opportunity to love the Burger King brand as well as to unite their partner in the form of a diamond—as a kind of flaming symbol of love,” said Klaus Schmäing, marketing director at Burger King Deutschland, in a statement.

The campaign also includes a 90-second video—that has been hailed in several publications, including Advertising Age—keyed to Pride Month.

The ad shows a gay couple, Dima and Alva. One half of the couple is not allowed to marry in his home country in Eastern Europe, so they are flown to Germany, where same-sex marriage is legal.

To commemorate the ceremony, which the fast-food chain paid for, the couple both received  Whopper Diamonds, set in wedding rings.

The three-minute video, created by German ad agency Grabarz & Partner, is meant to tie in with the restaurant’s “Have It Your Way” tagline. It can be seen here.

Image from the Facebook page of Burger King Deutschland