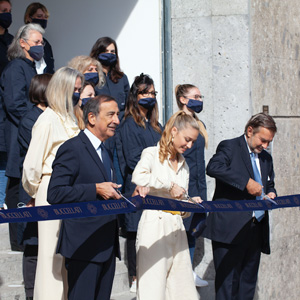 Heritage fine jewelry brand Buccellati cut the ribbon on a new headquarters in its native Milan yesterday and announced that it will be opening six new branded boutiques in Europe and Asia by the end of 2020.

The new headquarters is located in old Milan at Via Brisa 5, inside a building that was designed in 1919 (coincidentally, the year Buccellati was founded) by renowned Italian architect Piero Portaluppi.

The artisans, employees, and directors of the company—together with brand ambassador Beatrice Borromeo, Milan Mayor Giuseppe Sala, and Nicolas Bos, director of Richemont—gathered for a ribbon-cutting ceremony to fete the beautiful new location. Richemont acquired Buccellati in 2019.

The Brisa building features a gray stone flat ashlar facade in the art deco style and is located in front of the remains of the Roman Imperial Palace, which was built by Emperor Massimiano in the 4th century. The office also faces the circa-11th century Tower of Gorani house.

The building is owned by Reale Immobili and has been refurbished for Buccellati under the guidance of architectural firm Studio Park Associati. It’s now a LEED-certified building, which denotes the use of strategies aimed at energy savings, carbon emissions reduction, and good stewardship of resources.

The headquarters encompasses Buccellati’s goldsmithing workshops, a full showroom, and its suite of offices, helmed by brand president and creative director, Andrea Buccellati.

The six new Buccellati stores opening this year include a new flagship boutique in London, four new locations in China (two in Shanghai, one in Beijing, and one in Chengdu), and one in Hong Kong (which will be the second boutique in Hong Kong—there’s currently one in Kowloon).

Additionally, thanks to the infusion of capital from the Richemont acquisition, Buccellati has acquired the brand’s historic Rome store on Via dei Condotti, which was opened by Mario Buccellati in 1926 and belonged to a branch of the family descending from Federico Buccellati.

“It is a very important day for the company that bears the name of our family,” president Andrea Buccellati said in a prepared statement. “And with the inauguration of the new headquarters, we all start the next one hundred years of history of the maison. Under the guidance of Richemont we will expand in the world but respecting the greatest tradition we have, and craftmanship that was dear to our grandfather Mario.”

Top: The ribbon cutting at Buccellati’s new headquarters (all photos courtesy of Buccellati)