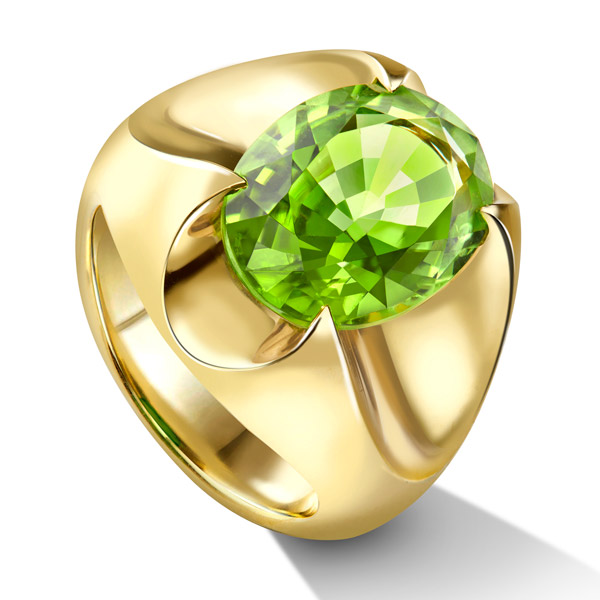 Jewelry creations featuring peridot feel especially moving this season, whether it’s the calming effect of the stone’s cool, crisp green or the plain fact that designers are demonstrating plenty of gorgeous ways to wear it—likely its both. Case in point: this one-of-a-kind ring, a collaboration between British designer Liv Luttrell and mining company Fuli Gemstones.

As the owner of the largest peridot deposit in the world—the Yiqisong Nanshan mine in China’s northeast province—Fuli Gemstones operates with a mission “to create the most captivating colored gemstones mining company in the world that is considerate of the planet and ignites the imagination of others.”

The peridot at the center of this ring certainly seems to do that: a 3.94 ct. oval shape, so grassy and bright you wouldn’t be surprised if it suddenly sprouted butterflies, its meadow-like features a fitting setting for such a scene.

From a macro view, this ring reads like so many other styles of the moment: chunky and gold, with a rounded domed body and lustrous finish. But it’s Luttrell’s hand that guides the design to another place entirely, dipping into pools of gold at its sides while a quartet of pincer prongs gracefully clasp the center stone—the “spear tips,” as the ring has been named.

It’s been inspired by the heavy rings of the medieval era, contrasting the weight of its importance with the abstract forms of 20th-century sculptor Henry Moore and the sultry curves of Brazilian architect Oscar Niemeyer.

“I love working with unusual gemstones, and it was an amazing opportunity to work with a Fuli Gemstones peridot of this size and quality,” said Luttrell in a statement. “The stone really lends itself to my signature Spear Tip ring, and the collaboration was an incredibly dynamic process which encouraged me to engage with the design in a new way.”

It’s yet another instance of the immersive power of peridot and a shining example of how beautifully designers are treating the gem that reigns as the birthstone of August.