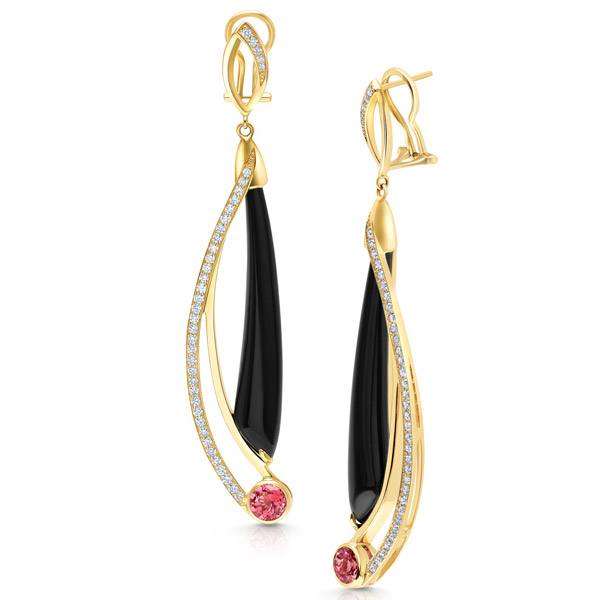 I’m happy to end the year on a high note—my final Britt’s Pick of 2018—with a jewelry designer that I have enjoyed following immensely over the last few years: Martha Seely.

If you’ve been following, you’re familiar with Seely’s work—this is her sixth feature in Britt’s Pick since 2016 (she would have already earned her Five-Timer’s Club robe by now)—and there’s a reason I keep angling to share her designs. It’s simply because I like them. I like them a lot.

I look at these earrings, and immediately I think elegance—far more elegant than I am capable of being, that’s for certain. But maybe, just maybe, this pair holds the power to transform a pumpkin into a coach—they certainly appear able to. Seely used to be a costume designer, after all, so transformative creations are not all that foreign to her.

The Comet earrings, from the designer’s Shooting Stars collection, are instant classics with an updated twist. The hand-cut black onyx is sleek and shiny, pairing beautifully with shimmering curves of diamonds that trail behind soaring round pink tourmalines—the colorful comets of the scene.

The black and white provide the classic bit, but it’s the punchy pink from the 6 mm tourmalines and the warm shine of the yellow gold that bring the update. These are positively radiant for the holidays, but they’ll brighten any event, ensemble, and ear.

For those seeking this silhouette with even more color, Seely has that too. This pair is available with hand-cut amethysts in a juicy shade of grape accompanied by Swiss blue topaz comets, also in 14k yellow gold and featuring diamonds. It’s the party-ready match to this sophisticated pair, equal in its glamour (and slightly higher in its price).

A great way to end 2018, soaring off like a comet into the new year. May 2019 be as beautiful and delightful as these.