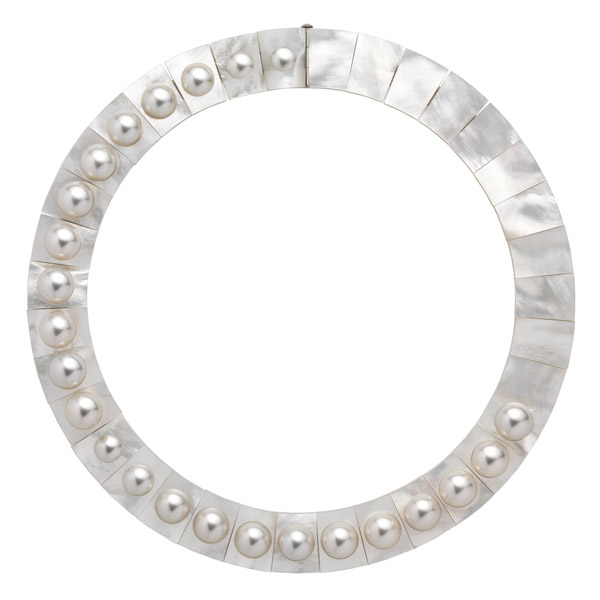 For someone who is pretty intent on having it out for pearls, I’ve sure been writing about them a lot lately. Oddly, I have derived so much pleasure from being proven that I have the wrong idea about the gemstone, though perhaps it’s not so odd once you get a look at the works—like this one by Melanie Georgacopoulos—that do so.

Peek deep under the covers, and my current skepticism for pearls is probably in some ways a rebellion against my own discomfort with the idea of getting older and becoming more “mom” every day. Because, somewhere along the way, those two things entered into a war with what it is to be cool—we’ve gotten the idea that these roles can’t coexist, and so the only option for an aging mom (yours truly) is to retreat into a style decidedly more vanilla.

This is, of course, not even remotely the case. The matronly image of pearls no longer really applies—they’re worn, beautifully, by people of all walks of life. In addition, the so-called mom jeans and dad hats donning the bodies of the fashion-conscious do well to prove that our parents have more influence on what’s cool than maybe we’d like to acknowledge.

Still, I constantly crave the creations that can take such a refined being as pearl well beyond its perceived limits, doing things with it that would make pearl purists squirm, stirring the pot for art that radiates a vitality that thrills and excites and is, ultimately, adored by even the lovers of purely classic pearls.

Like most pearl jewels I’ve profiled recently , Georgacoupolos turns the ever-known-as grandmother’s pearl on its head, pushing its boundaries to stunning results. While the creator’s Nacre necklace doesn’t fit the profile of low-key, easy-wear styles that are currently so demanded, it more than makes up for that in awe-inspiring looks, making it beyond acceptable to wear in those quarantine pajamas or whatever the attire may be (so long as it’s removed for things like showers).

Though the days of summer are now dwindling quickly, the season’s last official hurrah rushing us by this past weekend, I can’t help but picture the necklace adorning a figure on the beach, though that could be any time of year. Even a chunky fisherman’s sweater would play nice with such a treasure, the collar glinting with this mother-of-pearl line, enriched with the placement of silky South Sea pearls.

Though boundary pushing, don’t mistake that description for something that would be considered overly edgy or too far out of the box: This piece is downright elegant and wouldn’t look out of place on the Queen of England. Still, it’s a breath of fresh, salty sea pearl air all the same, and Georgacopoulos has much more where that came from.