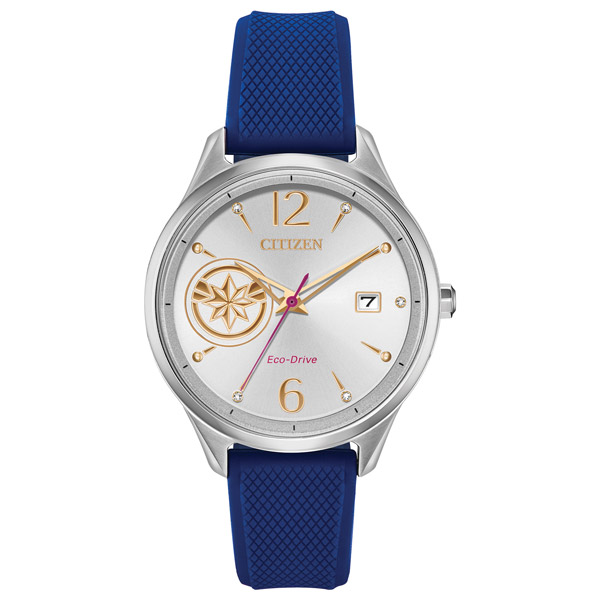 Citizen Watch continues to do awesome things with its recent unveiling of a Marvel collection—just in time for the release of the much-anticipated Captain Marvel film.

I’d be lying if I said that I knew anything about Captain Marvel to begin with, though perhaps if I had followed the comic books closely, I would. After years of watching the adventures of Captain America and the Hulk, Iron Man and Spider-Man, it’s about darn time the Marvel universe gave a woman her own movie. As Captain Marvel is said to be the most powerful of all of the Avengers, and is a female, I’m feeling pretty good about celebrating this film without seeing it first (though I plan to see it soon).

Citizen has a whole collection of Marvel-themed watches available, including Black Panther, the Avengers, Captain America, Hulk, Spider-Man, and more, and they’re all pretty cool, making them exceptionally collectible for comic book fans. But it’s the trio of recently released Captain Marvel watches—and this one pictured, in particular—that has my eye.

With a glossy look that’s also durable (kind of like the superhero herself), this particular model features a silver dial, gold and red accents, and the Captain Marvel emblem on one side of the dial, and it sits on a navy blue silicone strap. It’s the kind of watch that allures me because, as someone who doesn’t often wear a watch, it looks comfortable, chic, and, given its theme, packs some extra meaning.

Citizen was a sponsor of the recent premiere of Captain Marvel, which beat its own box office estimates, with the sixth biggest global debut of a film ever. The company will continue its collaboration with Marvel, so stay tuned to citizenwatch.com for more developments.