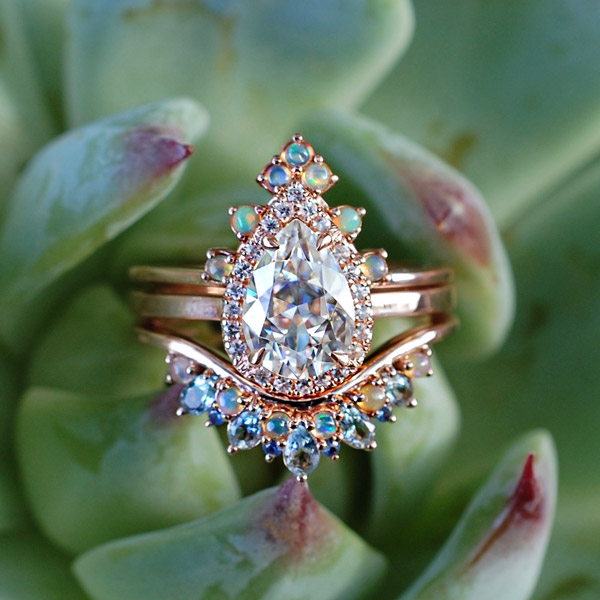 I first “met” designer Maggi Simpkins years ago. I don’t remember how I learned of her jewelry brand at the time, M by Maggnolia, but it didn’t take long or much convincing to make me the proud owner of two of her creations—a tight-fitting necklace that hugged my neck like a golden tattoo and a gilded ear climber that made me feel like a total goddess every time I wore it.

Simpkins has developed her brand—now eponymously named—well beyond those (very affordable) fashion pieces, into a custom engagement ring business the likes of which you’d be hard-pressed to find elsewhere.

While any piece of jewelry can tell a story, Simpkins has the ability to paint a picture of her customers’ experiences in a way that’s not just in the eye of the beholder, but for anyone who looks at it.

This recent engagement set is a perfect example. You wouldn’t know that the couple for whom it was made met on a dive boat in Indonesia, but you could probably glean the influence that water had on its design.

A series of aquamarines, sapphires, and opal “bubbles” lends an element of creation you rarely see in engagement sets (how many have you seen featuring opals?!), the gemstone combination part of two separate bands that hug the pear-shape moissanite center of the engagement ring on both sides like bejeweled bibs or tiaras.

If the sea-inspired gemstone elements didn’t tip you off, the engagement ring itself features waves on the side of its basket, more of a special secret for the wearer than an outward statement but an incredibly important detail, nonetheless.

Simpkins remains one of my absolute favorite designers to admire, at least until perhaps my 20th wedding anniversary (is it cool to redesign your engagement ring every 10 years?), when an excuse to procure one of her creations would present itself. Until that day, I’ll remain in awe of each new treasure she shares (like this gorgeous diamond ring accented with a rainbow-like arch of turquoise, I mean are you kidding me?!).