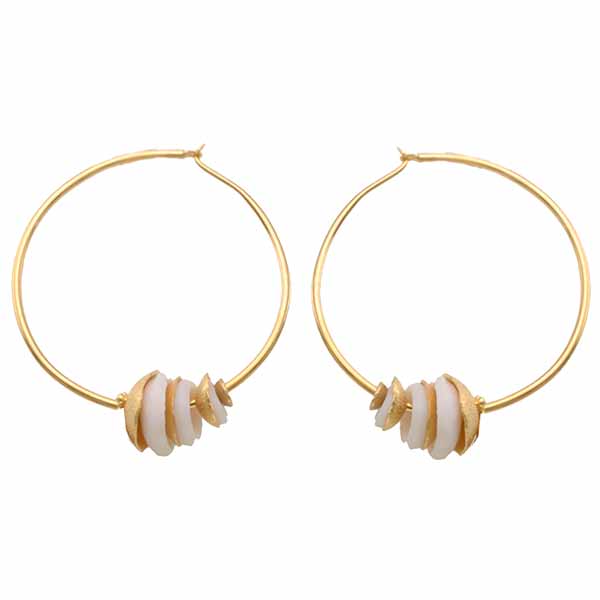 I will be the first to say that I’m ready for summer to be over. But that doesn’t mean that I won’t lament its passing.

My relationship with this stickiest season is a complicated one. It probably accounts for a majority of life’s most wonderful memories (I tend to travel during this time). But on the day-to-day level, it’s just too darn hot, and I spend a lot of time angling for fall (I’m lighting pumpkin candles and watching Halloween flicks by the time August rolls around each year, never fail).

So while I celebrate that September is in our sights, I’m already sort of nostalgic for the carefree feel of summer. It’s funny how a piece of jewelry can help me work through those feels.

Vanessa Montiel’s Golden Puka hoop earrings are the loveliest homage to summer. First of all, who doesn’t love a pair of great gold hoops? They’re flawless with just about anything, and, though the prominence of hoop earrings ebbs and flows, they’re certainly a timeless accessory.

This pair is extra special, because they’ve been kissed by a nested row of puka shells. Puka, which means “hole” in Hawaiian, has a storied history of its own. Found on some beaches in Hawaii, the smooth, bead-like style was carved by nature during its tumbling journey through the ocean.

Once the shells became an item of fashion—puka necklaces were wildly popular in the 1970s—man-made versions (whether in other seashells modified to look similar, or even those made in plastic) became huge. And then, of course, there was the puka choker of the ’90s, which, if you didn’t have one, you just weren’t with it.

The ’90s are definitely back in style, but this pair blurs the lines beautifully between then and now. The shells on Montiel’s hoops are hand-sourced from the beaches of Indonesia and set in 22k gold vermeil. Summer in an earring, to soak up the whole year round.