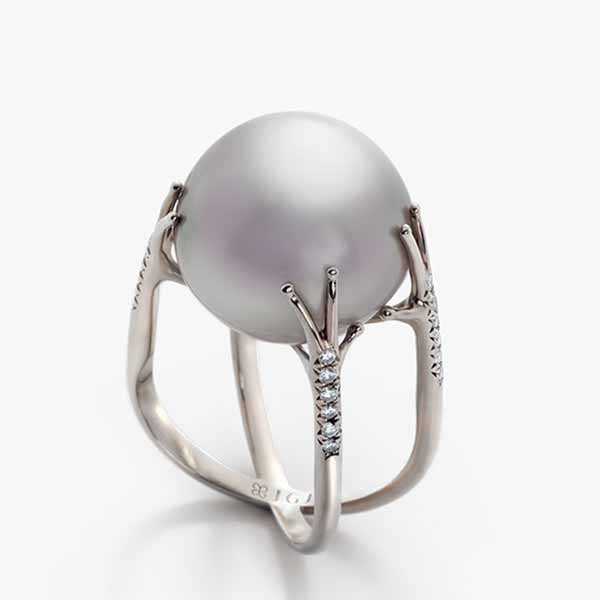 I am unfailingly enamored with a good fairy tale—as are we all, I would argue. Because even if you’re not reading one of the original stories, you’ve probably enjoyed one of its many iterations played out in film and TV, whether you recognize its influence or not.

There is a story by the Brothers Grimm, called “The Frog King or Iron Heinrich” (Henry, in German). Though historians argue that the tale itself could date back as far as Roman times, it’s traditionally the first story in the Brothers Grimm collection.

You may be better acquainted with The Frog Prince, or Disney’s The Princess and the Frog (one of my absolute favorites of the animated variety), which is a slightly altered version of this tale—many of our favorites are variations on an original—in fact, it wasn’t until I read the actual story that it all came flooding back to me.

I had a video of animated fairy tales that I used to enjoy watching when I was little, and it wasn’t until I came across this ring by Julie Genet that I even remembered its existence. One of the stories it illustrated is the very same that influenced this fantastic, whimsical ring. The cliffnotes are these: A beautiful princess enjoys a pastime of tossing a golden ball into the sky and catching it—one day, it goes up, and comes down not into her hand, but into a body of deep water. Who else is there to help but a frog—a spellbound prince—who offers to help in return for companionship.

So, the frog retrieves the ball for the princess, and guess what happens? The little brat runs home, ignoring the frog’s pleas for togetherness (though, it’s a frog, so who can blame her?). The frog follows her home, and her father insists she keep her promise to the frog, so she reluctantly does as she’s told, dining at the table with him,and bringing him to her bed (which, now that I’m an adult, sounds very questionable). The little girl gets ticked off and hurls the frog against the wall, upon which he turns back into a handsome prince (no kiss required!). And just like that, they were married. Okay, so the newer versions of the tale go into better—and more of-the-now—detail.

But what always struck me from this particular story is that golden ball. It’s what I remember from my long-ago VHS tape as I read this story, and it’s clearly what struck Julie Genet’s fancy, too. That’s what I love so much about her Roi Grenouille (King Frog) ring. This isn’t your typical frog-with-a-crown piece (though I like those, too). This takes a less straightforward part of that story and turns it into art.

The spiny fingers of a frog grasp the “golden ball,” in this case, not golden at all, but a 16.5 mm Tahitian gray button pearl. This “ball” is the key to the frog’s story, because it’s what gets him an audience with the princess in the first place, so I appreciate that the jewelry designer chose to spotlight such a vital element, where many would select something more literal.

Even without the story, it’s still a very cool piece—and one that promises to garner a ton of attention. Away from the fairy tale, I see something more alien: A sci-fi twist given to these extraterrestrial fingers that grasp the pearl, perhaps a representation of earth. It’s a creation that most anyone can find something to enjoy.