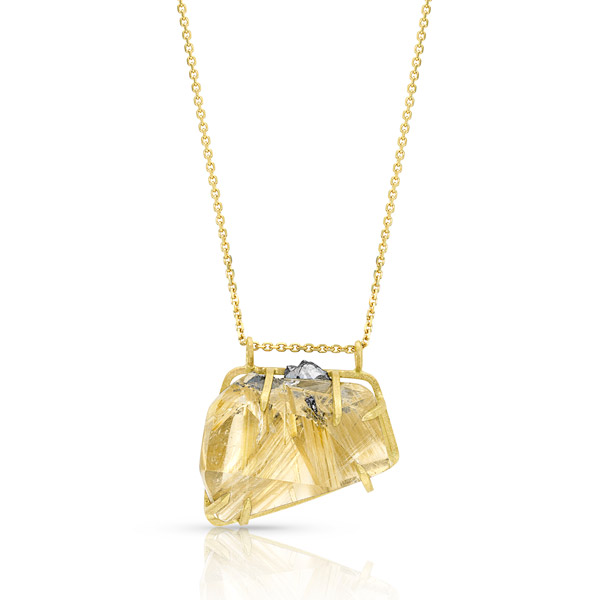 Lately it looks like nameplate necklaces are climbing the ranks. J-Lo wears one in the movie Hustlers, and, although the film was set in the early 2000’s (and Lopez pairs hers with a Juicy Couture jumpsuit, ah, 2007), that doesn’t seem to deter consumers from their participation in bringing the piece into this decade.

Plenty of jewelry styles come back around again and again, so, no, I don’t think it’s necessarily a poor choice to drop a bit of cash on a custom gold name necklace, particularly if you take care to store it when you’re not wearing it. But there are other, less on-the-nose options that mimic the style of a nameplate without actually being one.

This piece from responsible jeweler Enji Studio is one of those. Called Evora, the pendant takes the horizontal style you’d see on a nameplate and upends it with an artful, interesting gemstone centerpiece. From afar, you’ll achieve that yearned-for silhouette attributed to wearing your name on a suspended chain, but close-up, this is far from the same thing. So, okay, it’s not at all like a nameplate (then why did I immediately think of one when I first saw it?).

The nearly bar-style piece gets its relative shape from one of its smallest details: A double bail at the top of the pendant creates a straight line as it hangs from a golden chain, the only part of this design that isn’t slightly angled, rounded, or organically shaped. Without those bails, this article would take an entirely different angle (nevertheless, it would exist, and this piece ought to be acknowledged and celebrated).

From that top line, a crescendo of golden rutilated quartz—more than 22 carats of it—sourced from the Pyramid Mine in Novo Horizonte, Brazil (and ethically so, as noted on the jeweler’s website). A jagged mountain of hematite pokes through the top of the quartz, providing the contrast that takes this pendant from pretty and polished to raw and remarkable.

Whether you find the nameplate concept a stretch (I swear, the two are distantly related), Enji’s one-of-a-kind pendant is a keeper. And just in case someone was interested in making like J-Lo, I think this would look fantastic layered under a golden moniker all the same. Win-win.