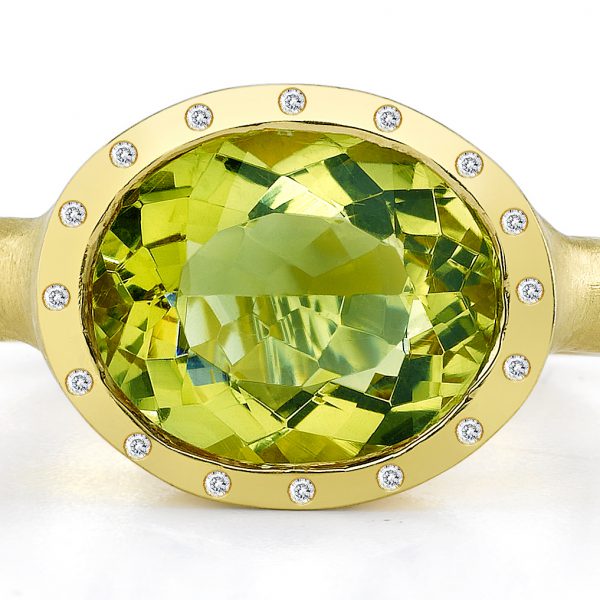 A shining example of Pantone’s Greenery

If there was any doubt that Pantone’s Color of 2017 would be embraced, there’s a healthy amount of jewels to show that Greenery already has quite the following. Or, perhaps, the yellowish-green hue has always been there, but now we’re actually looking for it. I admit that I was beginning to doubt Pantone—its choices of years past, in 2015’s Marsala and 2016’s double pink-and-blue combo, being a miss, in my opinion—and had stopped paying much attention to its Fashion Color Reports. And though this year’s Color of the Year announcement was met with mixed reviews (from yours truly, as well), you can’t deny the energetic, positive vibes that radiate from the choice. I commend Pantone for bringing attention to this particular shade, and in turn to gemstones such as this one. While stones such as opal, paraiba, and pink tourmaline have been (deservedly) holding the spotlight, Greenery widens the stage for peridot, tsavorite, and this little beauty, a yellowish-green beryl. Los Angeles–based family jeweler Dorian & Rose has crafted this bezel-set ring in the most beautiful way, framing a sensational gemstone with a bezel speckled in brilliant diamonds, like an old Hollywood stage shining its lights on some glamorous star. The ring would undoubtedly be admired even if Pantone declared a shocking shade of purple as its annual hue, but it’s ever so iconic right now. If you’re Arizona-bound this February, be sure to pay it a visit on display at JCK Tucson.