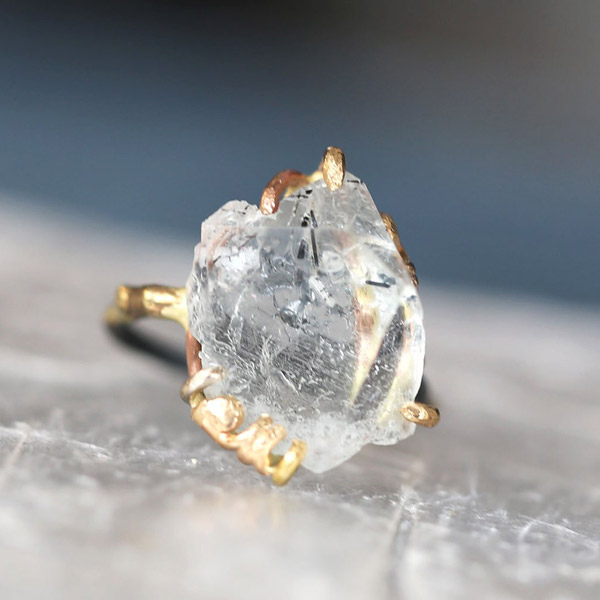 It was the sight that stole the show as I perused Instagram last weekend, a pale blue gem with an ethereal glow, much like the ghosts described in the mystery series I haven’t been able to put down.

The idea of these spirits has been romanticized in my reading, though the mystery—and fear—remains. Akin to finding beauty in the rough, that’s what this ring by the Santa Cruz, Calif.–based Variance Objects demonstrates. Except it’s not actually a rough-cut stone.

Only at first glance does the aquamarine at the center of this ring look as though it’s in the rough. Upon closer inspection, you’ll notice its smooth, purposefully helmed appearance. This is the brand’s Variance cut: The stone is cut and polished to highlight the its natural formation, keeping as much of the original find in one piece, wherein a traditionally cut stone much of it would get cut away. This method makes the most of what the gemstone has to offer, resulting in an artfully organic-looking finish that’s been tended to with thoughtful care.

In this particular instance, the piece that spoke to me from my feed reached out to the parts of my brain so in tune with the otherworldly right now (thanks to a very good, can’t-put-it-down series), you not only get the natural look that’s so clamored for now, but you take in a spiritual element too.

In crystals, aquamarine is said to promote self-healing and reduce stress as it calms and soothes, its sea-like appearance a relaxing presence. I can see that in this stone, but much like the ocean, it contains a strong undercurrent that just keeps pulling you in.

The stone appears to be held in the grasp of golden claws, which is accurate, but look deeper and you’ll also find detailing in rose gold and oxidized sterling silver, a concoction that has the tricolor pairing looking better than I thought it ever could.

For those more inspired by other colored gemstones, Variance offers a number of options (including a particularly persuasive morganite, if I may suggest it), in the form of rings, earrings, and pendants.

Variance Objects is the work of designer Nicole Rimedio, who founded the brand in 2013 with her partner Scott Zankman, who photographs the jewelry and manages the brand’s sales and operations.

As of this writing the ring has sold, but there is a smaller version available here.