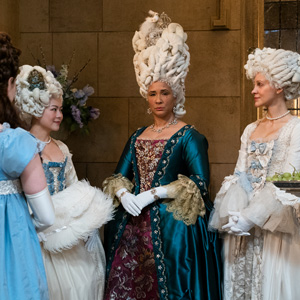 Even if you haven’t gotten around to watching Bridgerton, Netflix’s hit show that follows aristocratic families in 19th-century London, you’ve likely seen photos depicting its flamboyant, colorful costumes, many of which boast a sort of Jane Austen–on-acid aesthetic.

The undertaking of costuming the eight-part miniseries—an adaptation of Julia Quinn’s bestselling Bridgerton novels that was created by Chris Van Dusen, with TV superstar Shonda Rhimes as executive producer—was monumental. Veteran Hollywood costume designer Ellen Mirojnick, who earned an Emmy for her work on Liberace biopic Behind the Candelabra, was tasked with sourcing 7,500 pieces (apparel, shoes, jewelry, and accessories) for roughly 5,000 looks for Bridgerton, according to a recent interview she did with Vogue.

The costumes and jewelry in Bridgerton aren’t historically accurate, nor were they intended to be. Mirojnick told The Cut that she approached the costumes by looking at the fashions of the period and then “amplifying” them—a tack she’s taken on several other films, she says.

“I looked at the Regency period in London through drawings and paintings,” she told Vogue. “We got a flavor of it and then it was about looking at the different silhouettes and shapes while knowing that this had to be aspirational, as opposed to historically accurate. We knew that we had to shift the color palette and the fabrications, so from the 19th century, I immediately went to the 1950s and 1960s. The Christian Dior: Designer of Dreams exhibition at [London’s] Victoria & Albert Museum provided a wealth of inspiration.”

Bridgerton’s jewelry is classically glamorous, and stylistically pulls from several eras, including Regency, Victorian, and Georgian. Debutante and lead character Daphne Bridgerton (played by Phoebe Dynevor) wears a lot of short “diamond” necklaces (and in one pivotal scene is gifted an intricate diamond necklace by a visiting prince) along with an array of glamorous-but-prim bejeweled hair pieces and accessories. Her timeless jewels help paint the picture of restrained elegance that ultimately defines the character (she’s trying to be good, but she’s in love!).

Still, the most exciting jewelry in the show is worn by the taciturn Queen Charlotte (played by Golda Rosheuvel). The bored-and-bothered royal is always jeweled to the hilt—in a parure of bold “ruby” pieces, mountains of long pearl necklaces, and gemstone earrings the size of playing cards dangling beneath her sky-high curled white and gray wigs.

Here are some of the best jewelry looks from the soapy (and, well, very sexy) period piece everyone’s talking about: