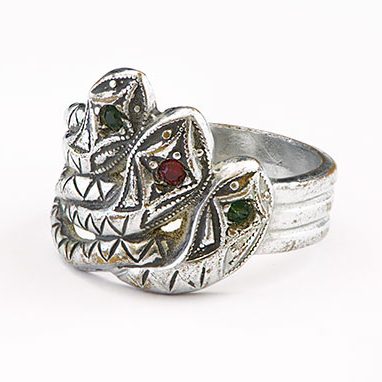 Plenty of auctions offer items belonging to the famous. Now RR Auction is offering jewels of the infamous.

As part of its “Gangsters, Outlaws and Lawmen” sale on June 24, the Boston-based auction house is offering jewels that belonged to celebrated gangster Al Capone and legendary bank-robbing duo Bonnie and Clyde.

The Bonnie and Clyde promise ring (top right)—marked by a three-headed snake—was first discovered among the possessions of Sheriff Smoot Schmid, who led the raid that brought down the doomed outlaw couple. He had it recorded in his family’s inventory as “Bonnie Parker Ring (3 Silver Snakes with Tiny Jewels).”

Even so, authenticating the Bonnie and Clyde ring was a painstaking process, says Bobby Livingston, RR Auction executive vice president.

Bonnie and Clyde stuck up jewelers, but this item is not believed to have been stolen.  Barrow was a skilled amateur craftsman, who practiced jewelry-making, leathercraft, and woodworking in jail. The items he was known to have produced there all bear similarities to this ring.

In addition, there is a maker’s mark inside the ring, featuring the musical note B alongside an arrow. As Barrow was a musician, it is believed that the hallmark spells out his last name, and the cupid’s arrow represents his love for Bonnie. 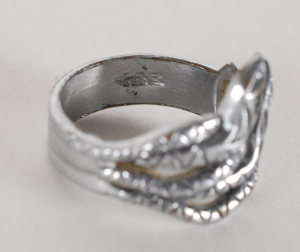 “There are definitely Bonnie and Clyde collectors,” Livingston says. “Towards the end, Bonnie was crippled for nine months, and yet Clyde stayed with her, even though it slowed him down. They were gangsters but there is this love story that resonates to this day.”

The auction house is also selling a pocket watch that belonged to famed gangster Al Capone, who was known as a snappy dresser. The triangular pocket watch, produced by the Illinois Watch Company, includes his initials, “AC,” spelled out in 23 diamonds, and has a platinum face and gold-tone numerals and watch hands.

“Capone is another American icon that people seem fascinated by,” he says. “To have his name spelled out in diamonds, it’s a pretty phenomenal sign of his ego. And his ego is what brought him down.” 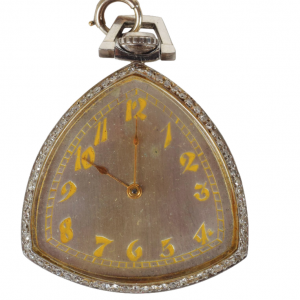 Also up for sale is a variety of other gangster- and outlaw-related memorabilia, including a pocket watch gifted by gangster Meyer Lansky and a warrant signed by Capone.