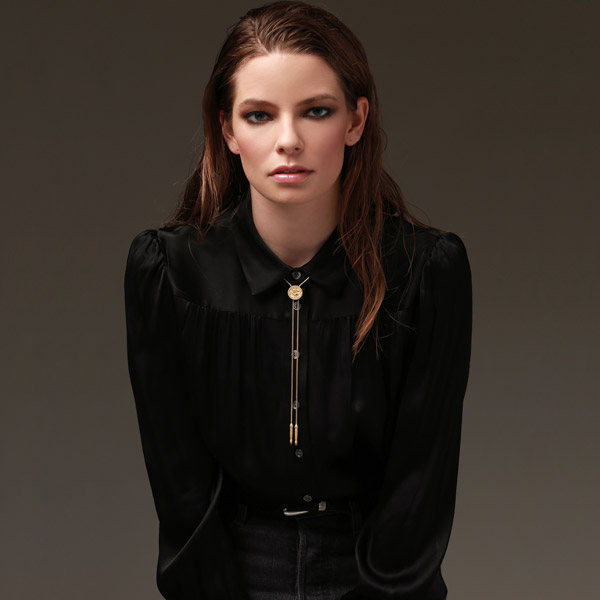 Here’s an item of jewelry I never thought I’d covet: the bolo tie.

My first recollection of the bolo tie, randomly, is via AC Slater on Saved by the Bell. Who knew I had even retained that memory? Not me, until I began writing this.

Fun fact about the bolo tie: Mostly associated with the Midwest, it became the official neckwear of Arizona in 1971. In 2007, New Mexico and Texas followed suit.

Its history is pretty layered, actually, and one that is worth reading about, if you’re interested. But most sources agree that the bolo tie originates from the Southwestern part of the United States, somewhere in the 1930s or ’40s.

As for its more recent history, that’s easier to track. Bolo ties have made appearances in Western flicks (John Travolta in Urban Cowboy) and teen rom-coms alike (Jon Cryer in Pretty in Pink).

A quick Google search of the item brings up offerings from Saint Laurent and an article from British GQ, so if that’s any indication, while they don’t seem to be screaming onto the scene, bolo ties are at the very least coming into focus.

Like most things, a bolo is better interpreted in jewelry form. And for that, look to Tenet Jewelry.

Tenet’s Bolos collection comprises a range of styles in 18k yellow gold vermeil and sterling silver, accented with gemstones and featuring beautiful etched images of things like roses and tulips. These bolos are less cowboy and more delicately chic—with a bit of that Western feel still retained.

New to market, the Los Angeles–based Tenet Jewelry is helmed by Haneen Dajani, a designer who previously worked in denim. It was this previous work that inspired her current line, featuring etched motifs hand-drawn by the designer in a range of bolos, cable chains, pendants, and signet jewelry. Her line is available in 18k yellow gold vermeil and sterling silver.