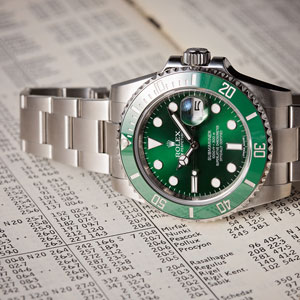 Bob’s Watches is one of the world’s largest retailers of pre-owned Rolexes. The online retailer posted $47 million in revenue in 2018, the bulk of which comprised pre-owned Rolex sales.

As 2019 comes to a close and we take stock of the year’s hottest watch and jewelry styles, we asked Altieri to share his top pre-owned Rolex watches of the year—a mix of the best-selling and most in-demand timepieces on the site.

Here are his picks:

“Among all the different watches that Rolex produces, no other watch is as desirable or fiercely collected as the Daytona,” says Altieri. “Vintage references sell for six- to eight-figure sums at auction, and modern editions are some of the most coveted watches on Earth. The black ceramic bezel on the ref. 116500 is reminiscent of the black acrylic bezel on desirable vintage references; however it uses state-of-the art materials to reinterpret this classic Rolex aesthetic for the modern era.”

He adds, “Since its release in 2016, the stainless steel with the ceramic bezel Rolex Daytona ref. 116500 has been the world’s must-have luxury watch. Although its retail price of $12,400 is significantly less than many of the other desirable luxury watches, the overwhelming demand for the Daytona 116500 and the relatively limited supply have resulted in a watch that money can’t buy. Prices have been continuing to rise in the years since its release and are currently sitting at roughly 100% above retail on the secondary market.”

“The Sky-Dweller is the most complex Rolex watch currently in production, and when the collection first debuted in 2012 it was exclusively constructed in solid gold—placing it outside the price range of the average buyer,” explains Altieri. “When the stainless steel Sky-Dweller 326934 was released in 2017, it significantly increased the accessibility of this feature-rich traveler’s watch, and the demand for the model skyrocketed.”

He continues, “Like many other stainless steel Rolex watches, retail prices for the ref. 326934 Sky-Dweller are significantly below the value of the watch on the secondary market. Although the appreciation in value started out relatively modestly, it’s quickly shot up due to an inverted supply-demand ratio. Less than a year ago we were selling this model for roughly $15,000; however, today’s prices for examples fitted with blue dials are currently around $23,000, with secondary market prices rising more than 50% in the past year alone.”

“Like the ceramic bezel Rolex Daytona, the ref. 126710 Rolex GMT-Master II with the red and blue Pepsi bezel is a modern reinterpretation of a classic Rolex design,” he says. “While the red and blue bezel calls back to the very first Rolex GMT-Master watch from the 1950s, this classic color profile was missing when the collection first switched to Cerachrom ceramic bezel inserts. The GMT-Master II 126710 represented the first time that a ceramic version of the iconic Pepsi bezel was fitted to a stainless steel GMT-Master watch, and it immediately became an instant favorite among both first-time buyers and collectors.

“After its 2018 release, the ref. 126710 GMT-Master II immediately [created] wait-lists at dealers, with demand far exceeding supply. The secondary market value of the watch shot up to roughly twice the retail price, and now even after more than a year—and the addition of a black and blue Batman version of the reference 126710 joining the Iineup—wait-lists at dealers are still several years in length, and the secondary market value of the Pepsi GMT-Master II is still nearly 100% above is current retail price.”

“The all-green ref. 116610 Submariner—nicknamed the Hulk—is structurally no different than the standard all-black Rolex Submariner of the same reference,” says Altieri. “But it’s one of the hottest Rolex watches out there. The vast majority of Submariner watches have black dials and bezels. And while blue exists as an option on precious metal versions within the collection, the Hulk Submariner is the only stainless steel model fitted with a colored dial, and the only Submariner ever to feature a green dial. The Submariner is a true icon, and the all-green Hulk is a vibrant and modern take on this Rolex classic.”

He explains, “The green ref. 116610 first appeared in 2010, and upon its initial release, it received a rather lukewarm reaction. Most consumers at the time preferred the traditional black Submariner, and secondary market prices for the Hulk were below their all-black counterparts. But within the last several years, the popularity and unique color of the all-green ref. 116610 have significantly picked up, and the secondary market value of the Hulk Submariner is now more than 50% above its current retail price.”

(All photos courtesy of Bob’s Watches)