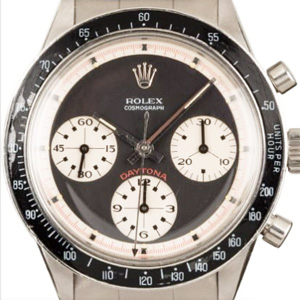 Bob’s Watches, the highest-volume dealer of pre-owned Rolex watches in the United States, is currently hosting an online auction of 16 remarkable Rolex timepieces as part of its Fresh Finds sale. The watches are fresh to market and original watches from their original owners. They’re being offered to the public for the first time, according to the online retailer.

There’s no buyer’s premium—a charge in addition to the hammer price that’s common in major auction house sales. And though the Rolex auction is open to the public, would-be bidders are asked to register for the sale and are reminded on its landing page: “What you bid is what you pay.”

The 16 Rolex models include Daytonas, Submariners, Explorers, and Chronographs including a circa-1947 Chronograph with old-school winding crowns, snap-on case backs, and pump-style chronograph pushers (current bid: $20,500).

But the most valuable of the 16 timepieces is the famous “Couch Paul Newman”—a Paul Neman Daytona reference 6241 with an estimated production date of 1970 that a woman in Canada famously found in between the cushions of a couch she had purchased from a thrift store. She alerted the store and no one claimed it, so it became hers. Bob’s Watches acquired the watch directly from the woman, and it is the centerpiece of its Fresh Finds sale.

The current bid for the Couch Paul Newman is $175,200, but Paul Altieri, founder and CEO of Bob’s Watches, tells JCK that he expects the watch to “fetch over $200,000 final hammer.” He adds, “It would make an ideal addition to any collection.”

The second-highest bid in the auction at publication time is $49,500 for a rare mid-century Submariner reference 6536 (see above), which is a smaller-crown version of the Submariner 6538 worn by Sean Connery in the 1960s James Bond movies.

See all 16 vintage Rolex watches up for auction here.