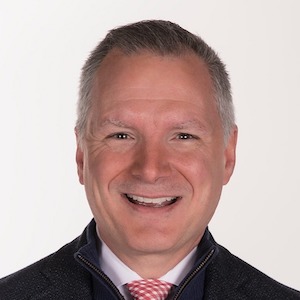 Robert (“Bob”) McIntire (pictured), a much-liked and admired three-decade industry veteran who worked at both Finlay Fine Jewelry and Asurion, died from cardiac arrest on July 25. He was 52.

McIntire started working at Finlay Fine Jewelry in 1990 and served as its director of stores until 2001. He later worked for Dillard’s and Bailey Banks & Biddle. Since 2010, he served as senior business manager for technology provider Asurion.

For the last three years, he was a board member of Jewelers for Children.

Jewelers for Children executive director David Rocha said in a statement that McIntire “was extremely passionate about his involvement and was never content to just be part of the group, he wanted to make sure that he made a difference and was always one of the first to step up when help was needed.

“During a visit to St. Jude Children’s Research Hospital he was deeply moved by the work he saw being accomplished and the difference the jewelry industry was making for sick kids. He became even more committed to making sure he did everything he could to help make Jewelers for Children a success. Bob always had a smile and kind word, and it was obvious that he was very genuine in his commitment to Jewelers for Children, his job, and most importantly, his family. He was a true gem of a human being.”

Wife Michele remembered her husband of three decades as an outgoing person who loved to joke around.

“Everyone knew him, knew his laughter. He had the most distinct laugh. People know that Bob was there just by his laugh. He was just hysterical. I think that is what everyone is going to miss the most about him.”

She says her husband didn’t set out to be in the jewelry industry but got a job at Finlay and worked his way his up. He “loved” being part of the business, she says, and he especially enjoyed guiding young people through their first engagement ring purchase.

He also enjoyed rock climbing, cooking, traveling, and food and wine festivals, according to an online obituary.

Rob DiRocco, senior vice president of client services and sales at Asurion, said in a statement: “Bob took great pride in his family, his work, his clients, and his work with Jewelers For Children. Despite his many contributions to our industry, Bob possessed a rare combination of professionalism, humility, and commitment.  He was always willing to take on any task, no matter how great or small … He will be greatly missed.”

He is survived by Michele, his wife of 30 years; sons Greyland, Tanner, and Jaxon; his sister, Stacey; and several nephews, aunts, and uncles.

In lieu of flowers, the family requests donations be made to Jewelers for Children.