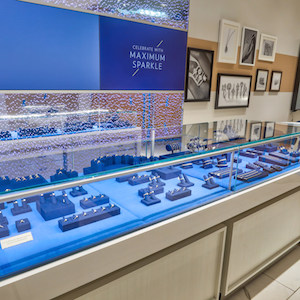 Blue Nile is opening three webrooms in the next month, the first time the Seattle-based e-tailer has opened new brick-and-mortar locations since 2017.

The new showrooms include one that opened Monday at Park Meadows in Lone Tree, Colo. (near Denver); one that will open on Nov. 2 at Fashion Island in Newport Beach, Calif.; and a third slated to open on Nov. 9 at Oakbrook Center in Oakbrook, Ill. (near Chicago).

In a statement, Blue Nile said that it planned to open 50 showrooms in the next three years. The plan seems slightly more scaled down than the one announced by CEO Sean Kell last year. Kell had said then the company was looking to open 50–100 showroom in the next two years.

Kell, who became CEO in August 2019, was unavailable for further comment.

The webrooms had been a priority of the company’s former CEO, Harvey Kanter. But their construction had largely been halted since Bain Capital bought the company in 2017.

Before these new openings, the company had webrooms in Portland, Ore.; Salem, N.H.; Garden City, N.Y.; Bellevue, Wash.; and Tysons, Va. The webrooms don’t sell any product but walk shoppers through the process and encourage them to buy via an iPad.

Like Signet, which owns rival e-tailer James Allen, Blue Nile is also beefing up its technology for virtual appointments, which have grown in popularity since the pandemic began. Later this fall, the company, which has traditionally conducted most of its business over the phone, plans to roll out a new tool that will make one-on-one virtual appointments “more personable and accessible,” it said.

This story has been corrected to note that Harvey Kanter is no longer chairman of Blue Nile.