Frederic Cumenal has resigned as CEO of Tiffany & Co. after less than two years in the job. 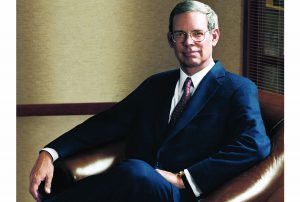 He will be replaced
on an interim basis by Michael J. Kowalski (pictured), who served as Tiffany CEO from 1999 to 2015 and is currently the retailer’s chairman. The board is currently searching for a permanent replacement.

While no reason was given for Cumenal’s resignation, the statement announcing his departure made it clear that the board felt change was needed.

The board “has been disappointed by recent financial results,” said Kowalski in the statement. “The board believes that accelerating execution of [our current core business] strategies is necessary to compete more effectively in today’s global luxury market and improve performance.”

Cumenal, a veteran of the LMVH Group, joined Tiffany in 2011 as executive vice president, focusing on sales and distribution. He was promoted to president two years later, and to CEO two years after that.

Cumenal’s resignation comes on the heels of another high-profile departure from Tiffany. In January, Francesca Amfitheatrof, the company’s much-talked-about design director, resigned. Reed Krakoff will now fill the role of chief artistic officer.

In fiscal 2014, Kowalski’s final year at the helm, sales rose 5 percent to $4.25 billion. But results have been far more mixed following the changing of the guard. Sales fell in fiscal 2015, and Tiffany’s guidance said they will fall in 2016 as well.

Still, Cumenal’s departure caught many by surprise, given his short time in the post, and the fact that many factors depressing Tiffany’s sales were, arguably, beyond his control, including the limp economy overseas and its flagship’s unfortunate proximity to the Trump Tower at a time when it was besieged by media, security, and protestors.

Also surprising: The departure was announced on Sunday, right before Tiffany scored a genuine marketing and publicity coup: It aired its first-ever Super Bowl commercial, starring Lady Gaga, just prior to the singer’s halftime performance. The commercial can be seen below.