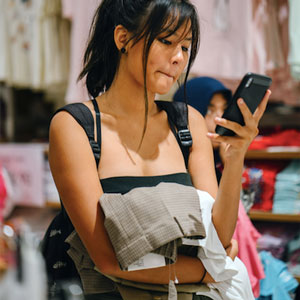 Retail analysts are still crunching the numbers on consumer spending from the long weekend, which encompassed two of the year’s biggest shopping days, Black Friday and Cyber Monday. But based on the statistics that have rolled in, the picture looks decently rosy—if not gangbusters great—for U.S. retailers.

Adobe Analytics estimated this week that sales from Thanksgiving through Cyber Monday will exceed $29 billion, or 20% of total revenue for the full holiday season, up from 19% last year.

But perhaps more interesting than how much consumers are spending is how they’re shopping.

The consumer migration from brick-and-mortar stores to online shopping platforms has been ramping up for years—e-commerce sales officially bested brick-and-mortar sales for the first time in 2018, according to ShopperTrak data. Though the final numbers aren’t in, it appears that trend is only intensifying. And mobile phones are the new holiday store windows, luring in shoppers and enticing them to spend.

Here’s what we do know about the big shopping weekend:

++ Black Friday sales at brick-and-mortar stores dropped 6.2% from 2018 but rose 2.3% on Thanksgiving Day, according to ShopperTrak data.

++ This loss was offset by a surge in online shopping, which hit $7.4 billion on Black Friday—up by $1.2 billion in 2018, and an all-time record, according to Adobe Analytics (though the total fell short of the $7.5 billion in online spending Adobe had predicted).

++ Consumers shopped on their phones this Black Friday more than ever before. Mobile online orders surged 35% on Black Friday, compared to last year, and 65% of transactions occurred on a mobile device, according to Salesforce. Adobe Analytics called Black Friday “the biggest day ever for mobile.”

++ Final sales statistics aren’t in yet, but Amazon said today that its customers bought more items around the world on Monday than on any other day in Amazon’s history, which spans more than two decades. In the United States, the top items sold on Amazon were the Instant Pot Duo80, a DNA kit from 23andMe, L.O.L. Surprise! toys, and the iRobot Roomba vacuum.

++ Online sales platform Shopify, which is used by more than a million merchants (including thousands of jewelry companies), reported on Monday that sales on the platform had already surpassed $1.5 billion, which is more than the sales from the full Thanksgiving weekend last year. Shopify also reported that 70% of transactions were conducted on portable devices, and 69% of Shopify purchases this past weekend were made on mobile.