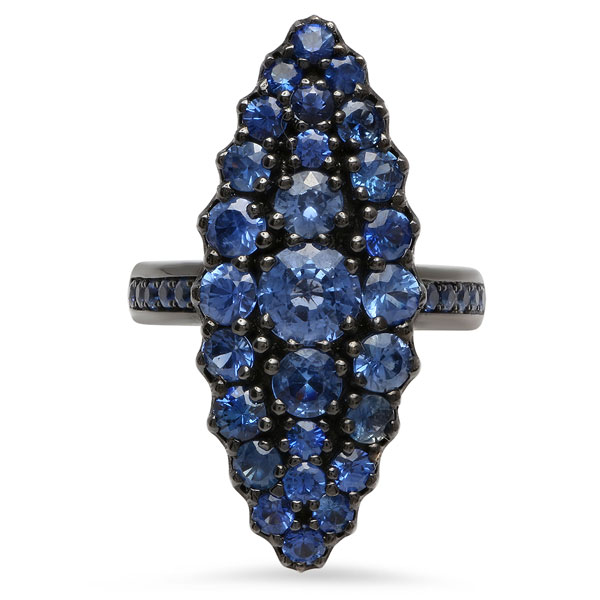 Last week, I wrote about sapphires—predictably, as the month of September began. But while I was looking through my emails and jewelry image files, I was struck by an increasingly common combination of materials featuring the beloved birthstone.

Black rhodium—or other methods of blackened metal—has been a great option for upping the drama factor in jewelry, making the gemstones pop and shine in a way that other metals don’t. When paired with sapphire, especially blue sapphire, it’s an electric look that is especially stirring. Which explains why it’s so common—though this year, it feels more prominent than ever.

I’ve always felt that blackened metals were especially good for fall. There’s an edginess to them that doesn’t quite vibe with summer, the season of light and carefree breezes and bright colors. But autumn, that’s a different story. It’s a time when leather is an acceptable choice of clothing (at least, when the temperatures finally start to dip). We embrace the macabre in anticipation of Halloween. The days get shorter and darker, and so does everything else (this is not a bad thing). So blackened metals just make sense.

There was a time when there were fashion rules people actually followed (what! Why?). Remember when it used to be gauche to pair black with blue, or—gasp!—black and brown? I’d like to think those days are long gone, but even if there are some still subscribing to those flawed restrictions, I think they’d be convinced otherwise when presented with as striking a combination as black rhodium and sapphire.

Whether it’s truly a trend or simply coincidence that I seem to have encountered this duo more than usual as of late, I’m not certain. But there’s something here that’s irresistible, and if retailers were to take stock of more jewels like these, their customers would no doubt take notice.

Bonus: As rebellious as the black rhodium might feel in autumn, the black-blue combination has a certain mystical magic in winter, setting the season of snowflakes absolutely aglow.