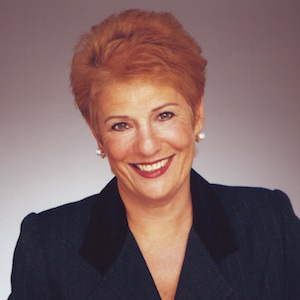 Phyllis Bergman, a pioneering woman in the jewelry business who headed Mercury Ring for 32 years, has stepped down as that company’s CEO.

Son Jeffrey remains president of the company, which since last year has been owned by Unique Designs.

Phyllis (pictured) plans to start a new business that will “help other companies to analyze, strategize, innovate, and connect in the international jewelry industry.

“I want to work on things that keep CEOs up at night,” she says. “This is something I’ve wanted to do for a long time. I’ve been on so many boards, and tried to be an agent of change. I really feel that this industry needs help, and it has to change.”

Mercury Ring was started in 1944 by Phyllis’ father-in-law, Arthur. After Arthur’s death in 1976, Phyllis’ husband, Ira, took over the company  Ten years later, when Ira decided to join M. Fabrikant, he mulled selling. Phyllis wanted to see what she could do.

“I used to go in part-time for a couple of years, but nobody paid attention to me,” she recalls. “I was a woman in a male-dominated office. But I did have good training. This was before computers, so I sat in the safe and picked orders. That’s where I learned that 80 percent of your business is done by your 20 percent of your product.”

She eventually reoriented the company—formerly a leading manufacturer of diamond studs—toward bridal.

“I wanted to be in a product that sold all the time. At the time, people were wearing the classic engagement rings with just one single stone. We were one of the first to do three stones.”

She was also, not incidentally, one of the first women to head a large jewelry manufacturer. She became involved with the Women’s Jewelry Association (WJA) when it was just starting out. That group led to others.

“Just running the company didn’t really fulfill me 100 percent. Once I started to go out and become a member of different organizations, I really began to feel that I was part of an industry. It’s made for a very exciting 32 years.”

Among the organizations she became involved with—and in most cases, eventually headed—were the WJA, the Jewelers Board of Trade, the American Gem Society (AGS), the Diamond Empowerment Fund, and the 24 Karat Club of New York.

All of which have led to shelves full of awards and accolades: She received the Humanitarian Award from the jewelry and watch division of the National Conference for Community and Justice in 2003, the WJA’s Hall of Fame Award in 2005, and the AGS’ Triple Zero Award in 2010.

If all this wasn’t enough, in 2014, she released a book, Married Fifty Years and Still Dating—A Guide to a Platinum Relationship, commemorating her marriage to Ira.

While Phyllis is bursting with ideas for her new business, it wasn’t easy leaving Mercury Ring this week.

“There was real emotion. You spend all that time building something like that up. But now it’s time to build something new.”