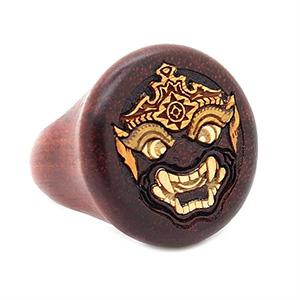 The Bangkok Gems & Jewelry Fair, Southeast Asia’s most popular and well-attended international jewelry fair, took place Feb. 20–24 at Bangkok’s sprawling Impact convention center. And while commerce was its raison d’être, the promotion of Thai craftsmanship, both time-honored and newfangled, was a parallel goal.

Thailand is the production center of Southeast Asia’s jewelry industry, and gems and jewelry are the country’s third largest export. So basically, “Gems and jewelry is big business for us,” said Chutima Boonyaprapatsorn, deputy commerce minister for Thailand’s Department of International Trade Promotion (DITP), during the event. From gem sourcing and production to retail and export, the industries “provide an upstream and downstream effect for us,” she explained. (Fun fact: Over 1.2 million people work in the gem and jewelry trade in Thailand—that’s nearly 2 percent of the country’s 69.04 million–strong population.)

While Thailand’s world-renowned jewelry and gem traditions are thousands of years old (gold craft traveled to Thailand roughly 2,000 years ago through Hindu settlers from east and south India, and the region was once rich in high-yield ruby and sapphire mines), the fair’s organizers are eager to embrace their young talent.

But in Bangkok, newness doesn’t exist in a vacuum. It’s always informed by history.

That duality was made clear just steps inside the show’s front doors, where a showcase of stunning modern re-creations of iconic Thai jewels was erected that included the meticulous re-creation of a Siamese king’s crown and a mixed-media take on ancient Thai armor.

While in the various halls of the show—and in beautifully produced sections designed to spotlight new talent—forward motion was emphasized.

In these brightly lit alleys filled with contemporary design, the fair’s theme, “Thailand’s Magic Hands,” was effectively shuttled into the present.

While discussing the fair’s onus, Boonyaprapatsorn noted, “We’re focusing on the smaller brands and on trying to help our SMEs [small and medium-size enterprises] grow.”

New and interesting design is—and should be—a huge draw for international visitors. Retailers looking for cool collections that no one else has will find plenty of options in Bangkok. And in the larger show, deals abound, particularly in the silver category—where trendy and interesting designs can be had for a song, in bulk, and on the spot.

Thai brand Fine Silver, for one, was wholesaling sterling silver stacking rings with marquise-cut peridot center stones for roughly $3.75 per piece. The pretty, on-trend rings could retail for $50 and up, no question.

The fair’s 63rd edition didn’t showcase only Thai brands, of course. The fair boasted roughly 1,900 vendors hailing from numerous countries, including China, India, Turkey, Japan, and Israel. And there was a nice section dedicated to small ateliers from Cambodia, Myanmar, and Laos.

Attendance was equally global. Final attendance numbers from the show haven’t yet been released, but DITP anticipated around 20,000 guests this time out, the bulk of them traveling to Bangkok from abroad.