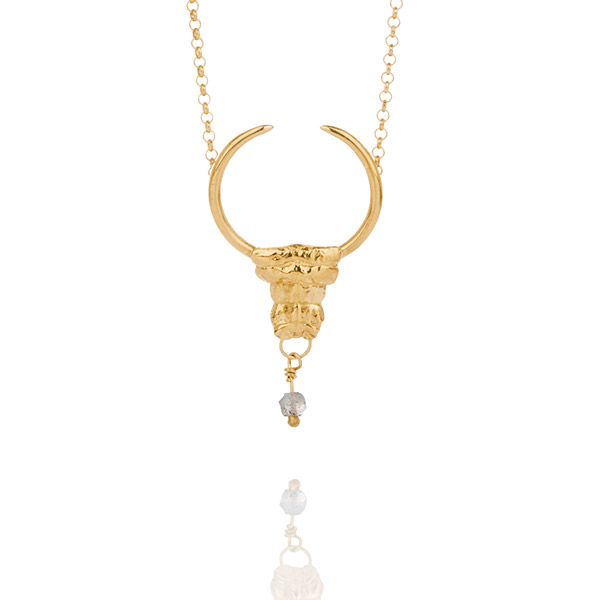 An interest in men’s jewelry feels on the rise—celebrities such as Harry Styles and Timothée Chalamet have really demonstrated a new level of style for men (and women, honestly), never shying away from good jewelry. But it still feels somewhat avant-garde when a men’s jewelry collection is introduced that goes beyond the traditional pieces (a wedding band, a watch, the occasional cufflink).

Icelandic jeweler Aurum has done that, with the release of its first collection dedicated exclusively to men (but again, completely and highly covetable by all sexes, if you ask me).

Griðungur—the bull—describes a portion of the men’s jewelry that takes inspiration from Norse mythology and, specifically, the four great guardians thought to protect the country’s lands. Each of Iceland’s four quarters is watched over by a guardian: in the East, Dreki (the dragon); in the North, Gammur (the eagle); in the South, Bergrisi (the giant); and in the West, Griðungur, the bull for which the collection is named.

It is in the northwest of Iceland where designer and cofounder Guðbjörg Kristín Ingvarsdóttir grew up, the region often inspiring much of her creation and not least of all this new collection.

Though this is the first collection designed exclusively for men, Aurum’s line is fairly gender-neutral in nature, with plenty of pieces to interest any and all consumers. Still, the designer was especially interested in crafting an offering for men. “For so many years I have wanted to make a dedicated collection for men. “Many of my collections are unisex, but it has been hard for men to see which item would fit them well,” said Guðbjörg in a statement. “For this reason I wanted to create an entirely new collection that has been specially made for men.”

The brand’s website features a dedicated men’s page, with pieces from the new collection combined with a selection of gender-neutral pieces to give them a broader range to choose from.