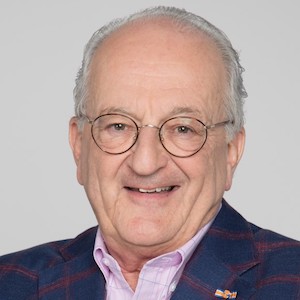 Veteran diamond dealer Edward Asscher (pictured) has been named the new president of the World Diamond Council, the overarching industry group that represents the industry in front of the Kimberley Process.

He succeeds Stephane Fischler, who took over in 2017 following the resignation of Andrey Polyakov of Alrosa. Fischler then served his scheduled two-year term.

Asscher, who currently serves as vice president of the group, formally ascended to the role at a June 5 virtual board meeting. He previously filled the role from 2014 to 2016. A past president of the Liberal Party in Amsterdam, he served as a senator for his party in the Dutch Parliament from 2007 to 2011.

Feriel Zerouki (pictured below), senior vice president of international relations and ethical initiatives at the De Beers Group, was elected the first female vice president of the WDC. She will succeed Asscher as WDC president in 2022.

In addition, Ronnie Vanderlinden, president of the International Diamond Manufacturers Association (IDMA), was elected WDC treasurer. Udi Sheintal, the former head of the Israeli Diamond Institute who’s been active in a variety of industry groups, was appointed WDC secretary.

Asscher said in a statement: “I am honored to be able to serve once again as WDC President, and to head a body whose entire purpose is to protect the integrity of the natural diamond, and also that of the industry that mines, manufactures and sells it, enabling all stakeholders to gain maximum benefit from revenues generated, especially in the developing world.”

Said Fischler in the same statement: “The past three years have been a highlight of my long career in the diamond industry. They have reconfirmed my belief that as a business community we have the capacity to positively change both people’s lives and livelihoods at the grass-roots level.”