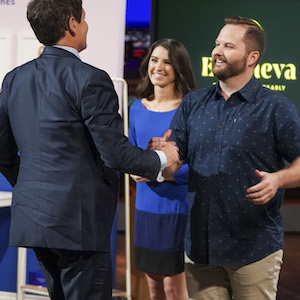 An ashes-to-diamonds company netted a big investor on the Oct. 13 episode of Shark Tank—billionaire Mark Cuban.

While other companies have offered similar services, cofounder Garrett Ozar said on the ABC show that his company does three times more business than its competitors, according to a CNBC summary of the show. He projects it will do $27 million in sales this year.

“What we do is grow real diamonds from the carbon in someone’s ashes,” he said. “But really, we’re in the business of celebrating remarkable people. Our diamonds give you something positive to look forward to.”

Not all the sharks were a fan of the concept.

Others were skeptical because the company had prior investors.

“This is a household branded experience,” Archer protested. “We need partners who can help us get in front of consumers.”

Cuban, however, was sold—once they met his price.

“I love the idea,” he said. “You’re a celebration company. I would have loved to take a hair from my kids when they were born and put it in a diamond and give to my wife as a gift.”

While Eterneva undoubtedly scored a public relations coup by appearing on Shark Tank, the idea of turning carbon from the ashes of loved ones into diamonds has been around for more than 15 years. The process has also drawn trade critics, who have cast doubt on the science behind it. Eterneva has a page answering skeptics and explaining its process here.