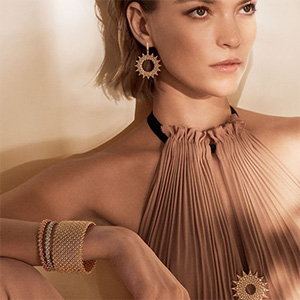 Supermodel Arizona Muse is the face of Roberto Coin’s latest advertising campaign, which was shot by famed fashion photographer David Sims and premiered globally this week.

This is the second stint for Muse as ambassador for the Italian fine jewelry brand; she starred in a global company campaign in 2015.

“When looking for a model to be featured in this campaign, it was without hesitation that we decided to work with Arizona again,” said Coin in a prepared statement. “She embodies our theme of timeless beauty and style.”

Muse added, “I’m overjoyed to continue to work with Roberto Coin. Roberto is one of the kindest, most encouraging people I’ve ever met…his jewelry, I think, is designed from his deep appreciation and respect for women.”

She’s also a longtime activist for environmentally friendly clothing and apparel manufacturing. According to fashion trade publication WWD, she’s preparing to launch her own collection of party dresses in sustainable fabrics this year. She designed the collection in collaboration with Georgie Macintyre, artistic director at designer fashion brand Matthew Williamson.

The Roberto Coin campaign is aligned with several other recent campaigns from major industry brands—including Pomellato, Tacori, and Forevermark—in its full-throated appreciation of the modern woman.

These campaigns, which target the self-purchasing female consumer, are a sign of changing times in the industry, fueled by a zeitgeist that’s been shaped in part by the #metoo and #timesup movements, among others.

“The concept of the campaign is based on style and diversity of women,” said Coin. “The visuals demonstrate the effortless beauty and style of every woman.” When Muse walks slowly across the screen in the campaign video, the words Effortless Style show up underneath her—denoting that this is fine jewelry made for women who have more to think about than fine jewelry.