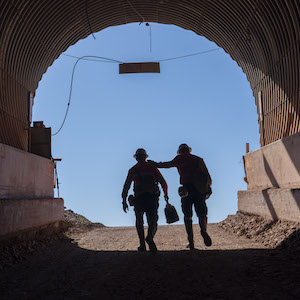 The Argyle diamond mine had its last day of mining on Tuesday, after making a significant contribution to the industry’s history during its 37 years of operation.

The mine, in Perth, Australia, fueled the rise of the Indian cutting sector, “democratized” diamonds by producing gems that could be sold at lower price points, helped bring about the end of the De Beers cartel, and gave the world an amazing amount of eye-popping pinks.

Diamonds were first discovered in Western Australia in 1979. Argyle’s alluvial operations began in 1983, followed by its open-pit mining in 1985.

Since then, the mine has produced a total of 865 million carats.

Decommissioning and dismantling the Argyle mine will likely take five years, according to a company statement. While its owner, mining giant Rio Tinto, has long said the mine would close this year, many found the occasion bittersweet.

Wrote one employee on an Argyle Facebook page: “As the [last production] continues its journey down through the crusher, up the conveyors, out into daylight and up through process, it carries with it many years of hard work, determination, and a great deal of satisfaction.”

Mine general manager Andrew Wilson told the Australian Broadcast Corp.: “Many people have given this business a lot of their years and have loved that journey.… There’s a real romantic feeling around this business.”

The journey was certainly an eventful one. For years, Argyle was the industry’s largest diamond mine by volume, producing over 40 million carats a year.

Yet, even at its height, it only represented about 6% of annual production by value. That’s because the bulk of its output was made up of “smalls” and brown diamonds traditionally considered “near gems,” unsuitable for jewelry.

That production, however, became a game changer for cutters in India, where labor costs were low enough to manufacture those stones profitably. Jewelry with Argyle diamonds was lapped up by mall-based mass merchants, opening a whole new segment of the market.

“The Indian diamond trade likes to say it did for diamonds what Henry Ford did for cars: It made them affordable to the American middle class,” JCK wrote in 1985.

On the other side of the spectrum, Argyle also produced a fair share of ultrarare­—and ultrapricey—colored diamonds, particularly pinks, but also reds, yellow, violets, and blues. The cream of that crop were sold at an annual tender, which became a reliable generator of publicity and trade interest. The Argyle Pinks also attracted an avid following among collectors, including The Notebook author Nicholas Sparks.

The likely penultimate Argyle tender is now in progress, though because of COVID-19, it’s being held virtually.

For its first 13 years, Argyle sold its production through De Beers’ Central Selling Organisation, which then controlled around 80% of the market. In 1996, after negotiations with the CSO broke down, Argyle did the unthinkable and started selling its production independently. Argyle’s defection is generally considered a seminal event that helped lead to De Beers dismantling the CSO four years later.

Argyle began as a joint venture between Rio Tinto and junior partner Ashton Mining. In 2000, Rio Tinto took a 49.27% stake in Ashton, beating out a bid by De Beers. That gave Rio near-total control of the mine.

The deposit was originally supposed to close up shop in the early 2000s. However, in 2006, Rio Tinto announced that Argyle would start underground mining, extending its life another 14 years.