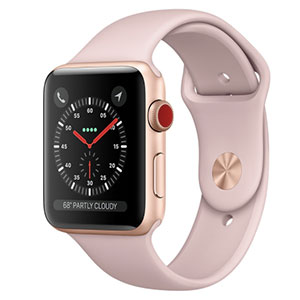 Apple shipped 3.9 million Series 3 Apple Watches in the third quarter of 2017, making the iconic tech company the number one wearable device brand in the world.

Of course the Cuppertino, Calif., company has worn this crown before—it rotates in and out of the top spot with Fitbit and Chinese  electronics brand Xiaomi with some frequency. This time, Fitbit came in second, shipping 3.6 million in Q3, while Xiaomi shipped 3.5 million devices in the same period.

According to Canalys analyst Jason Low, the Apple Watch Series 3 didn’t reach its full potential in Q3 because the company simply didn’t make enough: “It suffered limited availability as demand outstripped supply in major markets,” Low said in a statement. “Service providers had underestimated demand for the new Apple Watch.”

He added that Google needs to step it up in marketing its Android-based wearables, explaining, “Google must show stronger commitment to help Android Wear vendors, which are now mostly watchmakers and fashion brands, to further improve the user experience and app ecosystem. Otherwise, the market will see further consolidation, as vendors such as Apple, Samsung, and Fitbit dominate with their watch software platforms.”