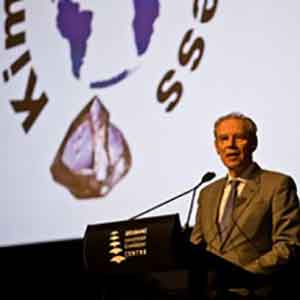 The departure is significant since Partnership Africa Canada was a founding NGO of the certification scheme, along with Global Witness. The latter group left the Kimberley Process in 2013.

Executive director Joanne Lebert said in a statement that the KP had not made enough progress regarding some hoped-for reforms, including improvements in internal controls and an expansion of the KP’s definition of conflict diamonds. The definition currently covers only diamonds mined by rebel groups in opposition to an established government. NGOs want to broaden it to include violence caused by governments.

“We have come to the conclusion that the Kimberley Process has lost its will to be an effective mechanism for responsible diamond governance,” she added. “The Kimberley Process—and its certificate—has lost its legitimacy. The internal controls that governments conform to do not provide the evidence of traceability and due diligence needed to ensure a clean, conflict-free, and legal diamond supply chain.”

The KP Civil Society Coalition previously boycotted the scheme in 2016 due to the chairmanship of the United Arab Emirates. It is chaired this year by Australia.

IMPACT said that it will continue to work with KP members to combat the trade in conflict and illicit diamonds.

World Diamond Council president Stephane Fischler (pictured) said in a statement he was saddened by the group’s move.

“We welcome the fact that IMPACT will continue engaging with industry on our common goal to protect the integrity of the diamond value chain,” he added.

Fischler said that he hoped that the Plenary’s discussion over changing the conflict diamond discussion would spur meaningful action.

“We have all agreed change is urgent and vital to meet consumer expectations and we look forward for the decisions made this week to be translated into meaningful progress,” he added.