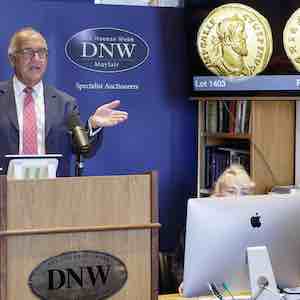 On June 6, a gold coin that dates back to ancient Rome which was discovered in a field earlier this year by a man with a metal detector sold at auction for £552,000 (about $695,000), auction house Dix Noonan Webb said.

That is five times the coin’s original £70,000–£100,000 estimate. The rare find attracted fierce bidding over the phone and online.

The 4.31-gram coin is described as little bigger than a penny. It is believed to date back to A.D. 293–296, to the reign of Roman-British emperor Allectus. Known as an aureus, just 24 such coins are known to exist.

The coin was found in March by a 30-year-old man with a metal detector who, along with his brother, had been searching for treasure for the past seven years in a plowed field in Kent, England.

The man, who wishes to remain anonymous, said in a statement, “I cannot believe it, we are ecstatic! We expected it to sell for a little over estimate, but not five times the estimate.” According to reports, he originally believed the coin was a fake.

The finder said he was sharing the money with the farmer who owns the field. The farmer is also “thrilled,” he said.

Said Christopher Webb, director and head of Dix Noonan Webb’s coin department, in the same statement: “As well as being one of the world’s most expensive Roman coins, it is the most money ever paid for a coin of Allectus, and it is now the most valuable Roman coin minted in Britain to have been sold at auction…. The only other [coin] known struck from the same pair of dies is in the British Museum.”