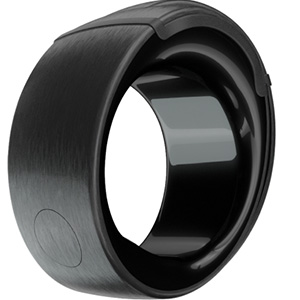 “Alexa, why am I talking to my finger?”

The ring has a black titanium outer shell and a stainless steel inner shell. For now, it is being offered by invitation only for $129.99, though the price will eventually increase to $179.99. Amazon is selling the ring in small, medium, large, and extra large sizes; users will first be sent a “fit kit” to determine their proper ring size.

It works like this: When users click the ring’s action button, they can ask Alexa questions or give it commands. The Loop can also be used for short phone calls—though hearing the person on the other end requires users to hold up the ring to their ear.

The ring is equipped with two microphones and a small speaker—though, again, users have to hold the ring up to their ear to hear what’s coming through. It also vibrates when the user receives notifications or an incoming call or to signal that Alexa is streaming a request to the cloud.

Like most smartwatches, the ring replicates a lot of the functions of smartphones, though it requires a connected phone nearby to be fully functional. It connects to Alexa via Bluetooth through the Alexa app on the user’s smartphone and utilizes the wearer’s smartphone data plan.

The ring’s power can last an entire day with one charge, Amazon says. It’s billed as both scratch- and water-resistant—meaning users can wash their hands with it on.

The Echo Loop Amazon product page can be seen here.

The ring is just one of a suite of new Echo products being released by Amazon, including Alexa-enabled prescription-ready eyeglasses and earbuds.

Below, writers for tech news sites The Verge and CNET demonstrate the Echo Loop.