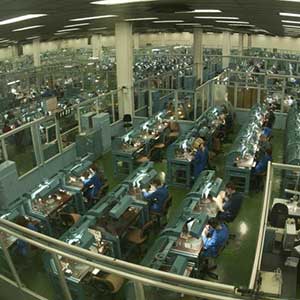 The supervisory board of Russian diamond miner Alrosa has given a conditional endorsement to the possible purchase of local diamond cutter Kristall Production Corp., according to Alrosa spokesperson Evgeniya Kozenko.

The 55-year-old Kristall, also called Kristall Smolensk, is considered Russia’s largest cutter and is currently state-owned. However, it has been included in the Russian Federation’s 2017–2019 privatization plan, though Kozenko warned that “there’s still no concrete decision on terms and conditions.”

An Alrosa statement further cautioned that the possible purchase is hardly a firm go.

“The final decision on Alrosa’s participation in the privatization of Kristall will be made only after determining the method of privatization, its price (which both should be defined by Kristall’s shareholders), and carrying out a detailed assessment of how this price relates to the possible economic effect of the transaction,” the statement said.

The statement said that Alrosa believes that this acquisition could, “under certain conditions, provide synergy.

“In particular, expanding of cutting and polishing business will help Alrosa to better understand trends in the diamond market, as well as to receive additional value from polished production.”

While most diamond miners have some cutting operations, it is still relatively unusual for a diamond miner to own a diamond cutter the size of Kristall. Alrosa already has a cutting division, Diamonds Alrosa, located in Moscow and Barnaul, Russia.

“In general, the possible acquisition does not mean a fundamental change in the company’s strategy (keeping in mind the volumes of Kristall’s business), since the bulk of Alrosa’s revenue is received, and will continue to be received, from rough diamonds,” said the statement.

Alrosa, one of the largest diamond miners in the world, is still largely state-owned. The government of the Russian Federation owns 33 percent of its shares, and the Republic of Sakha (Yakutia) owns 25 pecent.

An email to Kristall had not been returned at press time.