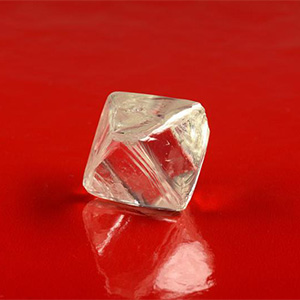 Alrosa is bringing some big diamonds to the Big Apple.

This week, the Russian miner will auction off some of the biggest, rarest finds from its diamond pits at a sale run from its New York City office.

The auction will include 81 diamond “specials” of more than 10.8 cts. each, including 20 fancy light-yellow stones. Among the biggest stones: a transparent 98 ct. diamond with a yellowish hue (pictured) and a 108.34 carater. Both stones were discovered at the Yubileinaya pipe in Yakutia, the Siberian republic that hosts most of the country’s diamond mines.

All the stones will first be displayed at the New York office, and then the actual sale will take place online. The sale kicked off on Sept. 17. Final results will be announced on Oct. 9.

It’s the second New York–based auction that Alrosa has held this year. The miner’s U.S. office reopened this spring, after shutting down in 2016.  (Prior to that, the office had been open for 10 years.)

Evgeny Agureev, director of the Alrosa United Selling Organization, said in a statement that Alrosa chose to hold the auction in New York City because “the United States is the country with the highest demand for diamond jewelry, so it is very important for us to develop sales here.”

This also marks the second notable auction that Alrosa has held this month. At the just-concluded Hong Kong Jewellery & Gem Fair, it held its first True Colors auction of large and rare colored diamonds.

That sale was highlighted by an extremely rare 11 ct. fancy deep purple-pink diamond, as well as 249 other notable fancy colored diamonds. The results of that sale will be announced early next week.

The True Colors sale is now set to become an annual occurrence and seemed designed to show that Alrosa has become a force in producing colored diamonds. Alrosa now produces 7,000 cts. of colored diamonds a year, Agureev said.