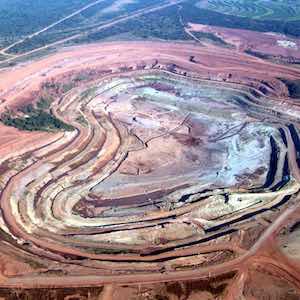 As much as $10 million was siphoned from Angolan diamond mine Catoca (pictured) by its former management, Russian diamond miner Alrosa told a Southern District of New York federal judge on April 10.

The miner has petitioned the judge to let it seek evidence from 16 U.S. banks of the possibly fraudulent transactions.

Alrosa owns 33 percent of the Catoca mine in Angola, according to a memorandum the miner filed in association with its discovery request.

The memorandum alleges that numerous transactions made by the former management of the mine indicate they were designed to transfer money from the company to suspected shell companies in Hong Kong, the Bahamas, and New Jersey.

Among the signs the companies were shell entities, according to a declaration by Boris Rollanovich Sedov, head of the analytics team at Alrosa’s security department: “They maintain bank accounts with banks notoriously known for being involved in money laundering schemes and located outside of the home countries of such companies; they have minimal share capital; their registered addresses are used by a number of entities and they do not have physical offices; there is no information publicly available about their business activity; [and] their nominee officers are associated with a big number of other entities.”

Sedov charged that, as part of the alleged scheme, the companies would charge Catoca inflated prices for goods and services that were ultimately provided by or delivered by others.

The Alrosa memorandum says that once discovery is completed, the miner intends to bring a shareholder-derivative action against the former manager of Catoca, as well as others involved in the purported scheme.

Neither Alrosa nor the former manager of Catoca, who left that post last August, could be reached for comment. At press time, none of the banks have filed a response to the miner’s motion.

News of the suit first appeared in Africa Intelligence.