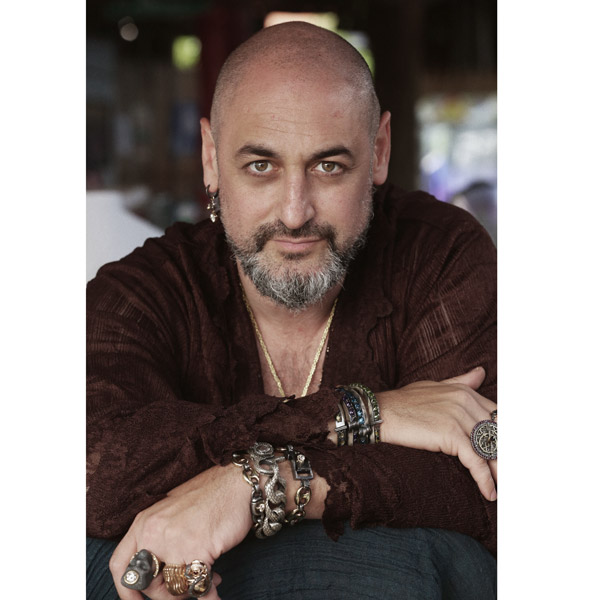 Though Alp Sagnak designs jewelry for all genders, I’ve always thought of him as a creator of men’s jewelry most. Perhaps that’s because he himself always wore memorable pieces, an impeccable model of his work and a prime example of men expressing themselves through adornment.

When I first learned of his work nearly a decade ago, I was so amazed at the detail and often wondered about his customer base. These are the type of pieces that are so badass rock ‘n’ roll—skulls, spiders, horns—you’d either feel like a high enchantress or a musical front man wearing them. But there’s a softer side to Alp’s creations, too, much like the designer himself.

When I first met Alp he was operating under the name Atelier Minyon, a brand with a parent company in Turkey. Sagnak purchased the brand from the parent company in 2012, but opted to start from scratch in 2015, leaving the past behind. And so, the eponymous brand was born and with it, an adventurous range of offerings.

Below, a chat with Alp Sagnak on what men are looking for in jewelry, how the gay community has influenced his design, and how the designer is helping to care for New York City during the pandemic.

What sort of jewelry are men looking for right now? Are you noticing any changes either as a result of the time we’re living in or influences from public figures?

My men are looking for mostly bracelets and cuffs with diamonds and gems. I realize for other companies their best sellers are chains and pendants and wedding bands—for me, it has not been the case. I never introduced a wedding band or bands for men. I have been making so many rings for men over the years, but all of them would be one-of-a-kind and mostly much bigger and heavier than they could see in other designers. Over the years skull rings have been my wedding band for men, I guess. As far as I can see from my research, there are not enough exciting bracelets out there for men to choose from—that is only my opinion, of course.

Do you feel like more men are becoming comfortable taking bigger fashion risks with their jewelry?

Definitely! First I need to mention about how definitions and behaviors have changed over the last 10 years. When I was talking to my male clients 10 years ago, most of them would look into the eyes of their partners and ask for their permission almost. They felt they could not make a decision for themselves—being in a jewelry store has always been for their partners in the past. For some, their partners would act like they like the idea of him wearing jewelry, but then give him a look that would make him feel like he is ridiculous, almost belittling.

Once that happened, the man would either be a puppy or a lion. If he becomes a lion, he would buy. For other male shoppers, as soon as he sees a piece he likes, he would go for it—no time wasted. Then everything started to change with time. I started to meet a lot of gay single men or same-sex couples. They were a fantastic gateway for me to understand and expand my designs. They taught me to be a more colorful and interesting designer. I started taking on projects from my friends, and I loved how the pieces we designed together came out. It was a whole new design style for me to learn. This new process taught me a very valuable lesson: Who am I to think for anyone else while designing when I am creating a collection? Then I started getting better with this new way of thinking. Now, in my mind, I do not design for men or women or gay or straight. I design for the individual. Something I would make for a gay man would easily sell to a straight woman or a straight man or vice versa in any combination of sexes.

How has it been living in New York during the pandemic, and how has it impacted your business?

At first New York was hit hard and the hit the most. Nobody knew how to act or react, me included. The first month was a big relief for me and my business. For two and a half months I was the only jeweler that was open in the tristate area because of my business structure. I spent all that time doing repairs for friends that were selling online—their businesses soared, and they had nobody around to even size the rings they sold one night before. 47th Street was closed, there was nobody around except me. I would be on the bench from 10 a.m. to 4 p.m. every day. Including Sundays! And at nighttime I was on Instagram trying to sell my inventory.

Tell me about the work you’ve been doing for the Bowery Mission.

Well, at night there was nothing to do, for me and for everyone else in lockdown. I never locked myself in during the pandemic. I stayed away from my kids only, for three months. That way, if I caught something, they would not be affected. My place is one block away from a homeless shelter in Nolita, called Bowery Mission. They have been helping the Lower East Side, Nolita, Chinatown, Little Italy, and SoHo area for, I guess, a century now or maybe more. Before the lockdown they were doing three meals a day, but then they had to cut back the dinner service. All I had to do was prepare meals, walk to Bowery Mission, and hand everyone their meals, since they would already be gathered in line waiting for Bowery Mission to open the doors. I thought I would make sandwiches for them to take and eat for dinner, but they immediately let me know they would prefer hot meals to cold sandwiches.

The first three times I prepared cold sandwiches, and then I started cooking. Here is what happened next, which I still think was a miracle! I posted pictures of the meal preparation and delivery to Bowery Mission on Instagram. The next morning Presley Ryann Jewelry from Tyler, Texas, texted me saying they would like to chip in! I said, “Thank you, but it is best to send donations to Bowery Mission” (which is already a huge operation!), and they said, “No, we want to send the money to you and you keep doing what you are doing.” I thought they would send $20–$30, but they sent a four-digit number! I said to myself, “This is crazy!” With their money I ordered a big badass BBQ to cook on. I posted the picture of the BBQ on Instagram thanking them, and next thing I know, Jo Latham from Dallas sends me money. Then A and C Gems from New York, then Zaiken Jewelry from New Jersey! Following that, my longtime friends and my casting company Elite Jewelry Casting and Bayam Jewelry from New York. I said “What is going on?” Then over 100 private clients started contributing from around the world, it was insane! I think together we served close to or maybe more than 1,000 meals. I will never forget that, and I will do my best to continue!

What advice would you give to retailers this holiday season for making their customers still feel like this year can be special?

Well, who am I to give advice to anybody, Britt? I am guessing they all know their clients better than anybody and you guys at JCK published so many fantastic articles already. But I guess I would say, ask your clients what they want. How can I help you? I am here whenever you need me.