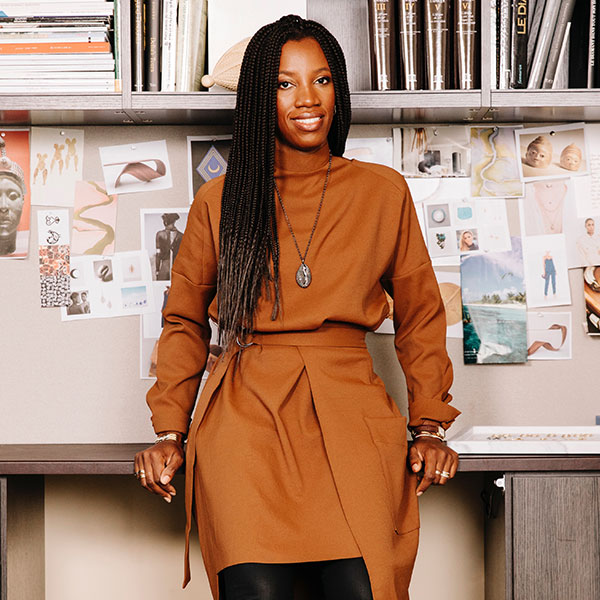 In July, when JCK’s “All That Glitters” blogger Amy Elliott interviewed Catherine Sarr about her fine jewelry brand, Almasika, the Chicago-based designer dropped a hint about a new collection that was in the works. All she revealed was that it would have “sculptural shapes and curved lines” and that it would delve even deeper into her “exploration of commonality across cultures.”

Two months later, the collection, named Sagesse—French for wisdom—is out and, true to Sarr’s word, it celebrates ancient symbols united by their relevance to cultures around the world. The designer, who was born and raised in France to parents from Benin in West Africa, conceived the range a couple of years ago, but before completing it, took a break from making jewelry in order to care for her young children (two boys, ages 10 and 6, and twin girls, now on the brink of turning 4).

Sarr dipped her toes back into the jewelry market in 2019, with a series of trunk shows in Chicago and New York. This year, she completed the Sagesse collection and began working with For Future Reference, a bicoastal brand development agency, to market her work to a broader community of retailers.

Rendered in 18k gold with accents of diamonds and gemstones, the beautifully designed Sagesse range embodies Sarr’s love for jewelry that has a subtle presence. “I like the idea of forgetting jewelry,” she says. “I have a lot of jewelry on all the time, but it doesn’t scream. It becomes part of me. That’s the kind of jewelry I design.”

Look closely, however, and the meaning embedded in all of her pieces is loud and clear. Below, Sarr tells JCK about what element she considers most important in a design, why she is drawn to 18k gold, and which symbol from the West African Adinkra tradition—a visual representation of ideas and aphorisms developed by the Akan people of Ghana and Ivory Coast—she finds most relevant to her own life story.

Sagesse is your third collection, correct?

Yes, it’s the third. The first one was Le Cauri Endiamanté, the story of me wanting to go back to my heritage. The cowrie shell represented fertility and spirituality across Africa, and then I realized it has this meaning across many cultures. It was the same for the Berceau collection. You go to stories that are beyond cultures, that can speak to you whether you’re French or American or Vietnamese. That’s what drives me. And it was very natural for me for this third collection, because it’s the same principle. I went into forms and symbols that have the same meaning, or deep meaning, in many cultures.

What was the beginning of the collection?

The first piece I designed was Universum, and it was concentric circles. There’s some jewelry in Africa that had it, and that was my inspiration. I realized these concentric circles have the same meaning across the world—it means the universe and infinity. And that was the beginning. In all my designs and inspirations, it’s the form that’s most important, that I try to perfect. It leads to gold.

What is it about gold that you love so much?

It’s raw human attraction to an object, wherever you come from. With all three collections, I always try to imagine a piece in gold. That’s why I use a lot of pavé. I’m so focused on having the right form, the right shape, that if I use diamonds, they tend to be pavé. There’s an evolution with Sagesse, because I’m using central stones and solitaires inside the piece. But the focus is still the gold.

Yes. When I was younger, for my communion, I received from one of my aunts a cross, and I wore it for many years. About 10 years after I stopped wearing it, I thought I wanted to wear it again. It was plated and the plating was coming off and I thought, What a shame that you cannot keep something forever. I wore it for so long that I could have given it to my daughter. Eighteen karat is everything to me. It means eternity. You know you can pass it on from generation to generation.

Tell us about some of the traditional adages that inspired the line.

These are wisdoms that have really shaped my life. I wanted to go back to that universality. They have meaning in many countries around the world. But I went back to the tradition of the Akan people, who share their wisdom with symbols.

The one that talked to me the most is the one around the star: “Just as all the fruits do not ripen at the same time, so all the stars do not shine at the same time. Mine will shine someday.” It’s about patience and hope. It leads back to my personal story: When I had this break with my children, I knew I had to be patient. Sometimes you have to take a detour in life and know that your time will come.