On Sunday, Sept. 5, acclaimed jewelry designer Alex Šepkus passed away at home due to complications associated with lymphoma. He is survived by his wife, Dange, of Westchester, N.Y., and a son, Kristupas, of Lithuania.

The world was alerted to the news via an Instagram post from the Alex Šepkus team on Monday followed by a prepared statement from Jeff Feero, Šepkus’ business partner of 30 years, that read in part:

“As we deal with this incredible loss, we also look to the future. Alex always prided himself on having a strong team of master jewelers who could execute his work to his exacting standards and, as he used to joke, even better than himself. He also has left an extraordinary archive of previously unreleased work that can keep his artistic vision alive and thriving for years to come. Our aim is to stay true to his vision and creative goals and continue to work and honor Alex in our efforts.”

Born in Vilnius, Lithuania, in 1954, Šepkus was the son of an architect and a graduate of the Lithuanian Academy of the Arts. He worked as a bespoke jeweler before immigrating to the United States in 1988 but always remained proud of his heritage and was deeply committed to carrying on its traditions. Friends and colleagues described him as a man of faith, deep intellectual thought, and an artist to the core.

Feero tells JCK that their professional journey began in 1991, when Feero was working for high-end Manhattan jeweler Julius Cohen. Šepkus was brought in as a specialist to do repairs in the company’s shop. One day he asked if Feero wanted to see his design work. “I looked at it and I was just stunned,” he says. “I thought I’d seen everything and I’d never seen anything like this. I literally gave him $10,000 and a bunch of gems and gold and platinum and said, ‘Here, just go with it.’”

They connected instantly. “I liked him so much, he had this dark sense of humor, was funny as hell, just really clever—he spoke seven languages—and he didn’t have the ego that most big jewelers have. I thought he was an unusual character,” recalls Feero.

From there, Šepkus made 24 pieces. Feero sold them immediately—and then quit his job a month later.

“Alex could not self-promote,” says Feero. “So I was Colonel Parker to his Elvis. He had no ego so I had to be the one banging the drum going around saying, ‘You should see this guy.’” 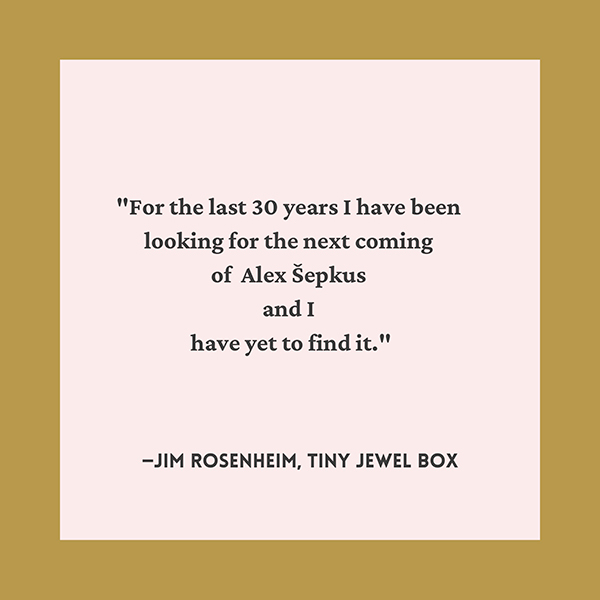 In the early days, Betteridge in Greenwich, Conn., gave the designer a substantial prepaid advance—and a vote of confidence—for some pieces, which helped keep Šepkus and Feero afloat during the recession of 1992. “I remember [Betteridge owner Terry Betteridge] said that he’s first and foremost an estate guy and that [our jewelry] will be collectors’ pieces 100 years from now—what people will fight over at auction houses.”

Within five years of establishing the business, Šepkus won the prestigious Jewelers of America New Designer of the Year award.

The news of Šepkus’ untimely death has prompted an outpouring of grief, gratitude, and words of thoughtful reflection from collectors, retail partners, and fellow designers.

Jim Rosenheim, owner of Tiny Jewel Box in Washington, D.C., was an early champion of the designer whom he has known for decades.

“I was at the New York show, before the jewelry shows moved to Vegas, and it was Alex’s first time exhibiting,” Rosenheim says. “I asked to look at this one ring and I looked it with my loupe, and my heart started pounding. Even at my age with my faltering memory, I can still remember that feeling.

“I put the line in the store and it took me a few months to sell the first piece and once it started selling, it went through the roof,” he adds. “Within a short time [Alex Šepkus] was my top designer line of fine jewelry and maintained that position for more than 20 years.

“Our families are very close. Alex understood that I understood his jewelry on a pretty profound level. His line holds a very special place in my history as a business. It has been the most satisfying, most pleasurable, and most exciting relationship in the jewelry business that I have ever experienced.”

Šepkus is best known for an intricate carving technique that made his jewels instantly recognizable. The motif reveals itself in many pieces, but is perhaps best exemplified in his Orchard, Little Windows, and Candy collections.

“He was just following his own vision, he always said, ‘I want to make things I’ve never seen before,’” says Feero. “He would say, ‘I don’t know where the idea comes from, I just sit down and work and stuff comes out of these fingertips. I’m blessed.’

“He was never chasing money or fame, he just wanted to do what pleased him,” Feero adds. “I think he will always be remembered for the personal integrity and honesty he brought to his work.”

Feero said the staff was “shattered” but that Šepkus had visited the workshop 10 days ago when the designer was in the city (he usually worked from his home in Westchester and had not been in since the beginning of the pandemic). “He spent hours with everyone,” says Feero. “Everyone is grateful for that time, not knowing it was goodbye.”

Ed Faber, president of the Aaron Faber Gallery in New York City, describes the legacy of jewelry design Šepkus leaves behind:  “Alex pioneered a strong signature style that captured devoted fans and flourished over decades. His dedication to craft and detail always set the work apart. He will be greatly missed.”

Debbie Klein, owner of Art + Soul in Boulder, Colo., which has carried the Alex Šepkus line for 18 years, calls the designer “a very unique individual. Funny and warm and quirky and one of those brilliant geniuses.

“People are attracted to his work because it’s so unique—the hand of the artist is so evident. When you take a piece out and you show [a customer] Alex’s little world under the loupe they’re immediately connected and drawn in. There is absolutely nothing like it out there,” she says.

“He didn’t always seem comfortable at trade shows, but when he was here in the gallery, I remember there was a young girl who came in and she was absolutely in love with his work and he spent an hour talking to her. She finally ordered the ring after about five years when she had enough money. It wasn’t just the work that made an impression on her but the energy and personality that he was able to infuse into his work.”

Klein also shared that when Šepkus and Dange visited her gallery for its 10th-anniversary party they were quite taken with her Yorkshire terrier, Harry Winston.

Fittingly, as Šepkus loved animals, Dange is asking that those who wish to celebrate his life consider donating to Bideawee in lieu of sending flowers.

A wake will be held this Saturday and Sunday in Tarrytown, N.Y., and funeral services will take place this Monday at Šepkus’ church in Sleepy Hollow, N.Y. A memorial luncheon in Briarcliff, N.Y., will follow. The Alex Šepkus’ team has posted the particulars of each event, to which all are welcome, here.

Top: “He was like a brother to me,” says longtime business partner Jeff Feero of Alex Šepkus (pictured), who passed away on Sunday, Sept. 5. (Photo courtesy of Alex Šepkus)