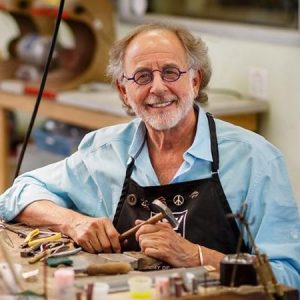 Named for Italian Renaissance goldsmith and sculptor Benvenuto Cellini, the lifetime award honors those who have made a significant contribution to the world of jewelry design.

Revere started as a jewelry designer. In 1979, he founded the Revere Academy of Jewelry Arts in San Francisco, which offered professional training to aspiring jewelry designers and artisans. He personally taught more than 10,000 students at the school, and many of his students went on to have successful careers in the industry. In 2017, he retired and closed the school.

Revere has written seven books on jewelry, including Professional Jewelry Making, which is considered the modern bible for jewelry craftsman. He also served as the past president of the American Jewelry Design Council and is a founder of the Contemporary Jewelry Design Group.

The award will be presented to Revere at 4 p.m. on February 8, 2019, in the New Designer Grand Ballroom at the American Gem Trade Association show at the Tucson Convention Center.

“Our organization is proud to acknowledge Alan Revere’s contribution to the jewelry industry and his influence on contemporary jewelry design,” said AJDC president Barbara Heinrich in a statement. “Alan has left his mark in metal, in print, and in the hands and hearts of jewelers all over the world. He brought European standards and aesthetics across the ocean and across the millennia at a very important time for our community.”