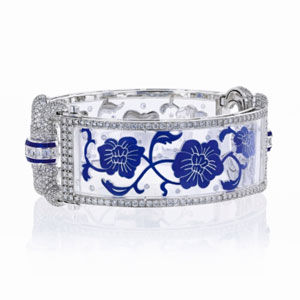 The five-piece one-of-a-kind collection will be released in two parts throughout 2020. Part one, Peony Symphony, boasts three pieces—a bracelet, ring, and earrings—all featuring cobalt-colored peonies as the primary design element, and sapphires, diamonds, and quartz for subtle shimmer.

The atelier shared that the entire collection was equally inspired by fairy tales and traditional Asian ceramic art. Chinese porcelain that used cobalt blue pigment exported from Persia was the height of luxury design in the 14th century (ancient and vintage blue-and-white tableware can be very valuable).

“Every piece is a reinvention of a classic fairy tale, translated for the 21st-century woman, and is…an heirloom waiting to be passed down from generation to generation, much like our beloved fairy tales and fondest memories,” reads a company statement on the collection.

The last two pieces from the high jewelry collection will be released in early 2020.

Baker founded the brand in 2018 with partner and company design director Hoonik Chang, and the duo debuted their first high jewelry collection that same year.

The atelier’s aesthetics are whimsical but always sophisticated—which is again the case with these new pieces. Last year’s Prism collection, for example, included $11,200 earrings that depicted gauzy clouds with a pastel-gem rainbow.

“We were enamored with the blue hues used in Asian ceramics and wanted to portray an image of a peony that was frozen in time,” Baker tells JCK, “[that] led us to our color palette of blue sapphires, white gold, diamonds, and quartz.”

(All photos courtesy of Aisha Baker)