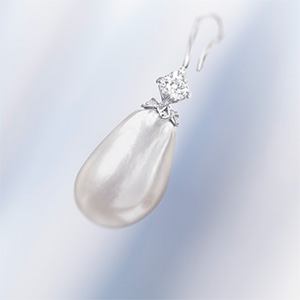 In what is being described as a first, Swiss Gemmological Institute SSEF used radiocarbon age-dating to pinpoint the provenance of the historic Ana Maria Pearl (pictured), which will be auctioned at Christie’s Magnificent Jewels sale on May 15 in Geneva.

SSEF’s carbon-14 analysis revealed that the 30.24 ct. natural saltwater pearl was formed sometime between the 16th and 17th centuries. This fits in with the available historic information about the pearl, which was generally presumed to have been discovered during the Spanish conquest of the Americas in the 16th century.

“This is a first for a historic natural pearl offered at auction,” said Jean-Marc Lunel, senior jewelry expert at Christie’s Geneva, in a statement. “The scientific innovation provided through radiocarbon age-dating is a critical addition to the extensive work we do on documenting the provenance of exceptional items such as the Ana Maria Pearl.”

In the same statement, SSEF director Michael S. Krzemnicki said, “We are in the process of further developing radiocarbon analysis and other scientific techniques to verify the historic provenance of antique jewelry and iconic natural pearls.”

The SSEF testing was done in conjunction with the Ion Beam Physics laboratory at leading university ETH Zurich.

The pearl is believed to have been owned by Ana María de Sevilla y Villanueva, XIV marchioness of Camarasa. It was believed to be a gift from King Charles V of Spain to her noble family, which owned it for generations.

The pearl is set as a detachable drop from its accompanying emerald brooch. The Christie’s lot that will be offered for sale next week also contains an invisible watch by Audemars Piguet, a design from the 1960s.