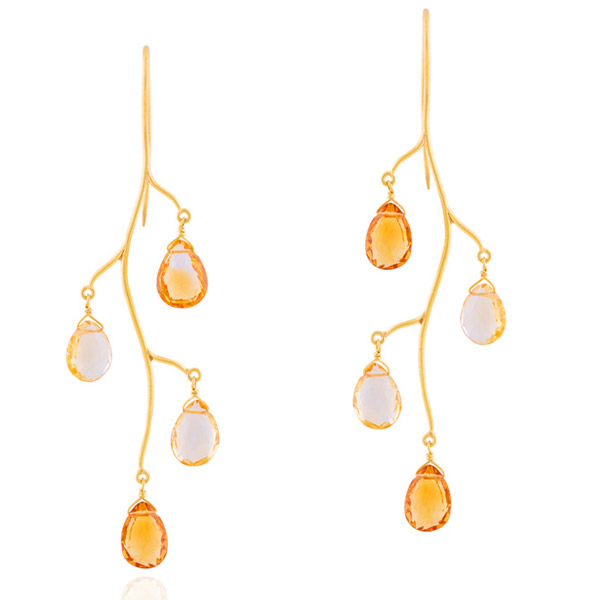 It is on theme with November to talk about citrine—it’s one of the month’s birthstones, after all—but this is a gemstone that should be allotted more attention than it gets. Though I haven’t always felt that way.

I recently bought a pair of citrine earrings—the first of the gemstone I’ve ever owned and a purchase I truly never thought I’d make. When I started in the industry working retail, I recall seeing citrine only as a centerpiece of very accessible pieces—$500 and under, sterling, generic birthstone-style jewels. The earrings I just purchased were within that price point, so I’m not knocking it—it’s just that I simply never witnessed citrine as a part of anything awe-inspiringly spectacular, you know the kind where you look at it and just know its price is comparable to that of a car.

Many things have changed since then, two in particular: 1) My world of jewelry has expanded vastly since those days working in a North Carolina suburb; and 2) jewelers seem to have taken to citrine like never before. Sure, maybe number two has much to do with number one—I’ve been exposed to more jewelry and different designers than ever, thus more citrine appearances—but no, I truly believe this underdog of a gemstone is having a moment.

For you jewelers who have witnessed many epic citrine designs—or to those who are creating them—please excuse my ignorance of its allure. Ignorance may be bliss, but in this case, it has just created a major case of FOMO. I mean, think of all the citrine I could have collected (or at least coveted) over the years—it’s affordable, too! That affordability, however, is a facet of the stone I have often found to work against it somehow. Its reputation for being budget-friendly—combined with the fact that it is very rarely not heat treated—has it feeling too aplenty, too available. A very rare stone this is not (though in its natural state, it is actually quite rare).

But the times, they are changing. There will always be customers wanting to spend their money on the rarest of gemstones, and spend they will. But I think that, during a time when lab-created stones are beginning to take hold, and shoppers are more concerned with where and from whom their goods are coming rather than how rare they are, the fact that a stone has been treated (so long as that treatment has been disclosed) won’t mean much to many buyers. This won’t be the case for everyone, but I think it will be true for a growing number.

And, honestly, if jewelers keep turning out designs like these? Natural citrine or treated, it’s giving off some very good vibes. It may have taken 11 years, but this stone has finally gotten my attention, and I’m not just admiring its appearances in passing but actively seeking more. These designers are the absolute embodiment of the Tyra Banks meme: citrine, “but make it fashion.” Looks like citrine is America’s next top model.