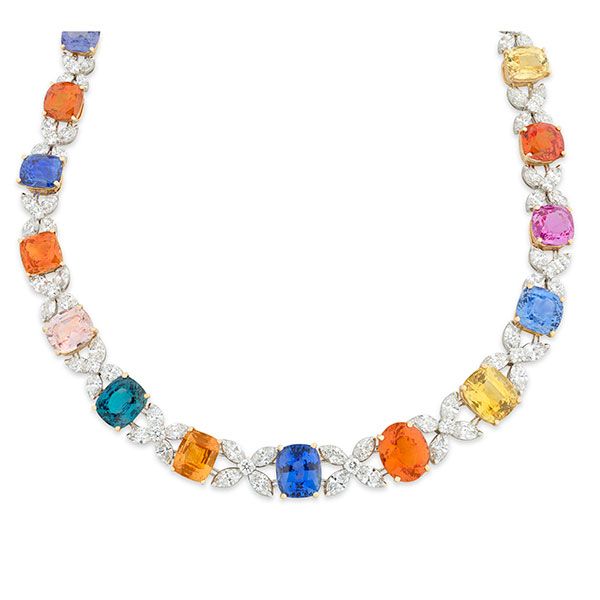 Earlier this summer, I pointed out three very good reasons for jewelry lovers to visit Baltimore, chief among them the upcoming Baltimore Art, Antique & Jewelry Show. Held at the Baltimore Convention Center, it opens Aug. 29 and runs through Sept. 1.

When I learned that M.S. Rau Antiques would be at the show, I was eager to learn what pieces the New Orleans–based dealer would be bringing and was treated to a sneak peek of the stash. It’s headlined without question by the jaw-dropping Oscar Heyman sapphire-and-diamond necklace pictured at top (see details at the bottom of this post—including its high-six-figure price).

Collectors and dealers who are motivated by provenance will be enchanted by an Ebel watch with a connection to Elvis Presley (pictured below). The King enjoyed a close friendship with the American gospel singer J.D. Sumner, who received the timepiece from Presley as a gift in 1974. Sumner served as a mentor to Presley early in his career, and later, in the early 1970s, he and his quartet were hired as Presley’s backup singers. They toured with him until his death in 1977. Sumner sang at the funeral.

See more M.S. Rau glamazons below, starting with this cocktail ring set with three exceptional examples of the most coveted colored diamond varieties in the world.

Top: Headed to the #baltshow and ready to break some hearts: This outstanding necklace with 111.16 cts. t.w. yellow, orange, violet, green, blue, and pale pink sapphires and 27.5 cts. t.w. diamond florets in 18k yellow gold and platinum by Oscar Heyman. It’s $728,500 and available at M.S. Rau, who will be exhibiting Aug. 29-Sept. 1. (Here’s a video showing this remarkable piece in action.)