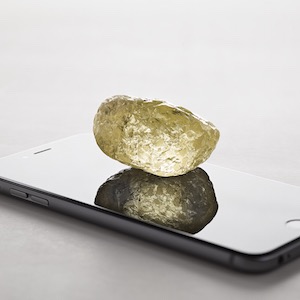 The now-famous “552” yellow diamond, unearthed at the Diavik Diamond Mine near Yellowknife in Canada’s Northwest Territories in October, was on view at Phillips auction house in New York City over the weekend. This incredible, as-yet-uncut 552 ct. stone is the largest diamond ever found in North America and made headlines in JCK and many other publications when it was announced in December.

Dominion Diamond Mines, which partially owns the Diavik mine and the Canadamark brand name, partnered with Phillips to show guests the incredible piece of history before it’s cut, polished, and sold.

The 552 was on display in the lobby of the Park Avenue auction house with security guards alongside a lengthy description of its incredible journey. For a little perspective, this diamond is larger than an egg, measuring 33.74 mm x 54.56 mm and is nicknamed for its weight, exactly 552.74 cts. One of the most striking aspects of this diamond is its age. Most diamonds were delivered to the surface by violent explosions creating vertical cones, called pipes, between 2.5 billion and 20 million years ago. If that is hard to fathom, consider that the 552 has been determined to be 3.1 billion years old—older than the vast majority of diamonds unearthed in this region of Canada.

Canadamark’s Jim Pounds says that, in addition to its age, it’s a miracle this diamond survived the Diavik’s processing plant, which crushes the ore to separate rough smaller diamonds—some thousands of carats a day—from other minerals. “It wanted to survive,” he says. “Its egg shape may have helped it get through the crushes.”

Pounds says that Canadamark is working closely with scientists and gemologists at the GIA on the best way to cut and reach the 552’s full potential. There are only about four diamond master cutters in the world who could do this stone justice, and Canadamark is still considering what shape the diamond will eventually be. The stone may even be cut into two, if experts believe that’s the best way to maximize its beauty. “We’re not really sure,” says Pounds. “We’re in the early days here.” The entire process could take up to a year, he says.

In the meantime, guests reveled in getting a glimpse of such a rare stone and one so unique in this part of the world. For someone who’s spent his entire life in the diamond world, even Pounds had to stop and ponder its significance: “This natural diamond is almost as old as the earth itself. I, myself, have seen a few pieces of rough diamonds of this size. But it happens only once or twice in a lifetime.”

Top: The 552 ct. yellow diamond was unearthed at the Diavik Diamond Mine in October (all photos courtesy of Dominion Diamond Corp.).