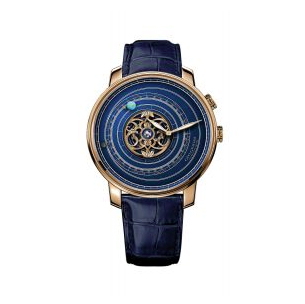 On Tuesday night, I’ll make my annual pilgrimage to Baselworld, the Swiss luxury watch and jewelry fair that takes over the Basel convention center every spring. I’ve been attending the show since 2001, so it’s an important ritual for me. As per usual, my schedule is packed (on Thursday alone, I’ve got 17 appointments!). Even though I have a love-hate relationship with the fair—try talking watches for 12 hours a day, for four days straight—I’m super excited about a handful of things on this year’s agenda:

1. My temporary home on the River Rhine

Every year, the Baselworld press office invites me to stay—free of charge—on one of the many hotel-ships that pull into Basel during the show to accommodate the overflow of people that come to town. When I first started going to the fair, they would put members of the press on boats parked at St. Johann, a pretty little dock located just beneath the famed Grand Hotel Les Trois Rois (the cigar-smoking epicenter of the Baselworld social scene).

But after about five years, they moved the press to a dock further north on the River Rhine, steps away from the industrial Port of Switzerland, an eyesore of shipping containers destined for the big pharma giants that call Basel home. After nearly a decade of staying there, I grew tired of the grim and out-of-the-way location. (To get to the tram station, you’ve got to walk 10 minutes along a dark canal.) I made a special request this year to be returned to the boats at St. Johann. And to my surprise and relief, the Baselworld press office graciously agreed. My home for four nights starting this Wednesday: the Avalon Imagery II.

2. Timepieces that take my breath away

For all my kvetching about the fair and its 12-hour days spent talking timepieces, I attend every year because the collections introduced at Baselworld inspire a year’s worth of stories. I’m always on the lookout for groovy timepieces.

The Geo.Graham Tourbillon Orrery being shown this week by the British brand Graham is a good example: The 18k pink gold tourbillon model features a blue lacquered dial with a depiction of the solar system that includes genuine fragments of planets! The moon is represented by a fragment of the NWA 4881 meteorite, the Earth by a polished hunk of Kingman turquoise, and Mars by the Tissint meteorite. 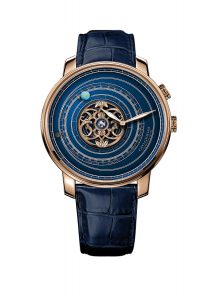 The Geo.Graham Tourbillon Orrery by the British brand Graham

3. Dinner in the dark

On Friday night, JCK publisher Mark Smelzer and I have dinner reservations at Blindekuh Basel, the original “dinner in the dark” establishment. Founded in 1999, Blindekuh (which means “blindman’s buff” in German) employs blind waiters and other staff with impaired vision to serve diners in an environment that I can only describe as a black hole (if my experience at a dinner-in-the-dark event in Berlin in 2009 is any indication). Imagine wrapping a pitch-black sweater around your eyes before enjoying a multicourse meal that includes wine. I’m looking forward to having a trippy night out—something about not being able to see your food, your utensils, or your dining partner makes conversation both challenging and thrilling. I just hope Mark doesn’t have a panic attack when he realizes how disorienting it is to be in utter darkness. 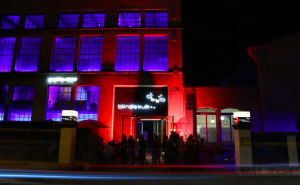 Picchiotti, the Valenza, Italy–based jewelry firm, will ring in its 50th anniversary at Baselworld in high style. Not only will the company use the occasion to unveil Picchiotti: The First Fifty Years, a 248-page coffee-table book written by jewelry historian Vivienne Becker, but the seven-member Picchiotti family will also host a Saturday night dinner at Restaurant Schloss Binningen, where I will most likely eat my weight in spargel, the seasonal white asparagus beloved by the Swiss.

The book chronicles founder Giuseppe Picchiotti’s journey through five decades of making jewelry, from the iconic 1967 Rose brooch, which features 400 brilliant-cut pavé-set diamonds on a baguette stem, to the firm’s 50th-anniversary masterpiece, L’Anfiteatro, an 8.05 ct. ruby ring inspired by a classic amphitheater, due to be unveiled at the show. 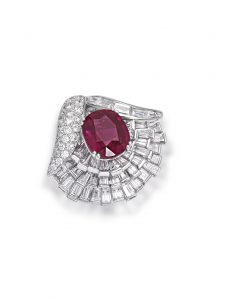 L’Anfiteatro ring with 8.05 ct. ruby and baguette diamonds from Picchiotti

5. A spin around Basel in a Tesla

Last week, I was invited to join the watch brand SevenFriday on a spin around Basel in a Tesla. I scheduled it for noon next Sunday, my last afternoon in the city before heading to Zurich to spend the night with friends. Nothing like going out in style! 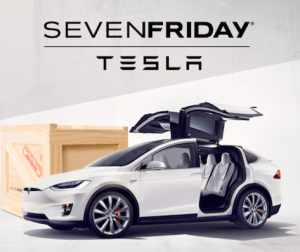