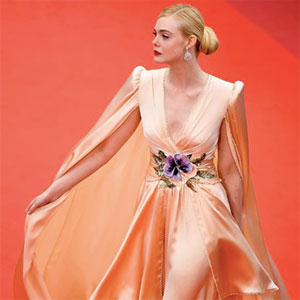 The 72nd edition of the annual Cannes Film Festival kicked off this week in the south of France, and the parade of high-wattage jewels that help make Cannes one of the most glamorous red carpets in the world has officially begun.

Days one and two of the festival saw several major celebrities—Julianne Moore, Elle Fanning, and Amber Heard among them—donning high jewelry pieces from longtime Cannes jeweler Chopard. But Messika and Cartier have also scored some high-profile placements. And it’s only just begun—so we could see a host of other brands make their mark during the nearly two-week-long event.

Here are my favorite jewelry looks from the first two days (check back for a full roundup of Cannes jewels right here, next week).

On day one, Selena Gomez, who’s at Cannes to promote the Jim Jarmusch film The Dead Don’t Die, wore a Louis Vuitton ensemble with a Bulgari necklace set with nearly 100 cts. of white diamonds from the atelier’s new High Jewelry Cinemagia collection.

Elle Fanning’s also in France to promote The Dead Don’t Die and is arguably the ingenue du jour on Cannes’ red carpet this year. Her fashion and glam teams, led by stylist Samantha McMillen, always get it right—and so far they’ve outfitted her in two winning looks (see them here), both of which included dazzling high jewelry from Chopard. The one below is my favorite of the two.

Turkish actress and model Dilan Çiçek Deniz wore dazzling Messika jewels, including a show-stopping collar necklace that was so major, there’s a video on Instagram of someone putting it on her.

Top: Elle Fanning in Gucci and Chopard at the Cannes Film Festival (image via: @festivaldecannes)