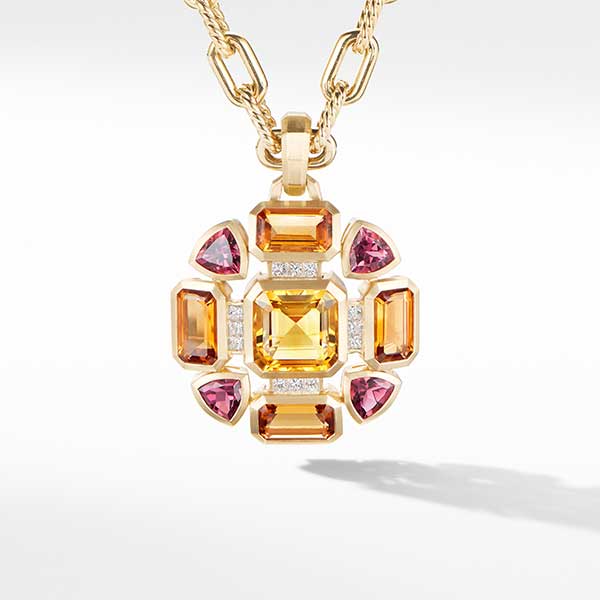 Medallion necklaces are jewelry’s MVP this season. Typically designed as circular gold disks, these pendant styles go all the way back to the Greco-Roman era, when they were worn as visible symbols of wealth. Today, the medallion has taken on new resonance as a way to convey meaning via engravings on one or both of its sides, be they initials, birth dates, horoscopes, or symbols.

But the traditional gold circular pendant on a long yellow gold chain has become so popular that it’s beginning to feel a little cliché. That’s one reason why we love colored stone medallions—these are circular or semicircular designs that boast a cluster of similarly hued gemstones, or an artful arrangement of stones in complementary hues, in place of engravings.

Below, we feature five fresh takes on the medallion that can be worn alone or layered with other necklaces for maximum impact.

In the Novella collection, David Yurman riffs on one of the brand’s most recognizable collections, Renaissance—the first collection David and Sybil designed together. Using a similarly rich color palette inspired by classical paintings, the line pairs architectural silhouettes with a bold array of gemstones, available in both cool and warm hues.

The kaleidoscope is the ultimate toy for anyone besotted with color, so it stands to reason that in the 1990s, when the house of Harry Winston wanted to create an objet d’art for gem lovers, it created the Ultimate Kaleidoscope, a limited-edition jewel for the home. This year, the brand pays homage to that bejeweled creation with a new line featuring medallion necklaces set with gems in symmetrical patterns, swinging from 30-inch gem-set chains.

A piece by Moritz Glik is instantly recognizable. That’s because the New York City–based jeweler’s signature design, the Kaleidoscope Shaker, is like nothing else out there. Enclosed within white sapphire glass, a smattering of faceted gems shift like sand in an hourglass. In this Ten Ten Shaker necklace, the circular frame lends the piece a lovely medallion-like quality.

This year’s quarantine wasn’t all bad for Jeanette Park, the designer behind Chicago-based ParkFord: Her new Revival collection is proof of that. Rife with semicircular motifs that recall her hometown’s spectacular architecture, the collection has a number of long necklaces that interpret the medallion style in surprisingly contemporary ways.

Temple St. Clair’s Horizon pendant is small and made of gold, but its beguiling assortment of rainbow gems—like an eight-gem take on the traditional Indian nine-gem navaratna—sets it apart from the plain-gold styles dominating showcases this season.